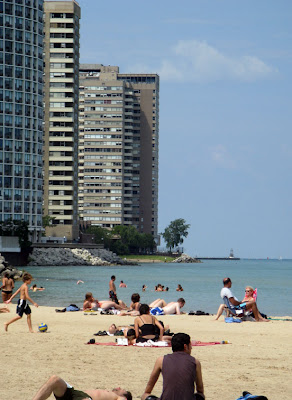 Ok, it's cold, damp, and deteriorating. I don't like where this is heading. What better time to contemplate not just the challenges, but the more inviting - and warmer - natures of our waterfronts?

Urban Waterfronts 26th Annual Conference 2008
is a three-day event that begins Thursday evening, November 20th, and continues through Saturday. The conference will be book-ended by an open plenary address by Sadhu Johnston, chief environmental officer of the City of Chicago, and a closing address by Gerald W. Adelmann, executive director of Openlands. In between, there's a generous array of panels on such topics as the effect of global warming on coastal cities, waterfront transformations, signature bridges, the preservation and re-use of historic waterfront architecture, and many more. The wide roster of participants includes Elgin mayor Ed Schock, Biloxi mayor Gerald Blessey and Riek Bakker (not the make-up artist, but the architect), from Rotterdam. A champagne reception and gala dinner will recognize the 22nd Excellence on the Waterfront Honor Award winners. You can find program and registration information for the conference here.

And if you just can't get enough of awards, there's the rather curious rolling series of them being passed out as freely as party favors this Thursday to Saturday by a group called the Environmental Hall of Fame, inducting into multitudinous repositories of honor national, state, and city, animal, vegetable and mineral. With no fewer than 36 "honorees", there's something for just about everyone, including the Chicago Park District, the Chicago Public Schools, the CTA, Kimpton Hotels, Pat Quinn, Whole Foods, the Merchandise Mart and Pierce and Keely Shaye Brosnan. (I think I may also have seen Svengoolie on the list, for his heroic recycling of rubber chickens, but I could be mistaken.) Who knows? Maybe if you show up at one of the receptions at the Hotel Allegro, "rated the Greenest Hotel in Chicago," you'll get an award, too. Info here.
(Click on time for permalink) 10:41 PM