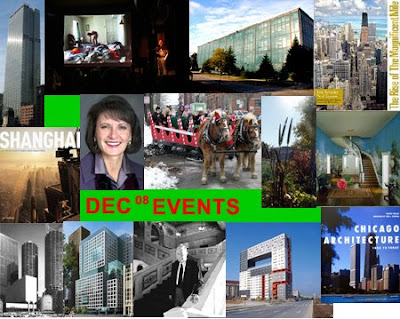 Even though the month shuts down after the 18th, the December Architecture in Chicago calendar is still as overstuffed as the bottom of Warren Buffet's Christmas tree, with over three dozen great events.

Check it out NOW because its really front-loaded, with nearly half the events taking place this week, including a scheduling log-jam on Wednesday the 3rd where Friends of Downtown annual meeting (a symposium on the Burnham Plan and Chicago's future with Dennis McClendon, Ald. Brendan Reilly, Frank Beal of Chicago Metropolis 2020 and Peter Kindel), Iker Gil talking about new social housing in Madrid (sold out), a doll house viewing and lectures by Bill Tyre and Sally Sexton Kalmbach at the Glessner and Clarke Houses (if you think it's just for sissies, you haven't heard about the minature rooms of Frances Glessner Lee's Nutshell Studies of Unexplained Death) and an overview of the new Lurie's Children Hospital now rising on east Chicago avenue - all going on at the same time.

Things kick off this Tuesday the 2nd, ending that evening with Pecha Kucha, vol. 7 - now in 3D! - at Martyr's. Also on Wednesday, Jay Pridmore lectures on his great new book, Shanghai: The Architecture of China's Great Urban Center at lunchtime at CAF. On Thursday, Newberry Library offers a lecture and book signing by Ann Durkin Keating on her new volume, Chicago Neighborhoods and Suburbs: A Historical Guide. Late in the month, there's also programs on 300 N. LaSalle, the Lake Calumet region, Lisa DiChiera discussing the preservation battle at Great Lakes Naval, a film on John Holabird, and lectures and book signings for Eric Bronsky and Neal Samor's The Rise of The Magnificent Mile, and Edward Keegan's Chicago Architecture: 1885 to Today, both at CAF.

Joe Rosa closes out the month on the 18th as he previews the Art Institute's upcoming Bertrand Goldberg retrospective with a Landmarks Illinois Preservation Snapshots lecture, Are We Ready to Landmark Goldberg Buildings?, at the Chicago Cultural Center.

And for holidays, the Glessner House Museum offers up it's annual weekend of candlelight tours, craft bazaars, and sleigh rides for the kids Saturday and Sunday, the 13th and 14th, and the Gene Siskel Film Theater is showing what has become its own holiday perennial, Hiroshi Teshigahara's documentary Antonio Gaudi, the week of the 12th.

And believe it or not, there's a lot more. Check it all out - including all the links I'm too lazy to incorporate into this post - here.