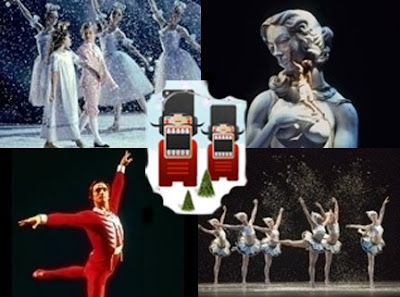 OK, so actually they're two different programs, but what they have in common is that they're both on Ovation TV, the arts-oriented cable channel. 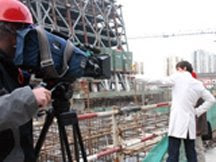 This coming Sunday, November 30th, marks the return of Ovation's Nutcracker Death Grudge Match, hosted by the great Mark Morris, which will present, one a night, six different choreographer's productions of Tchaikovsky's perennial holiday classic ballet. Kicking off the competition will be last year's champ, Morris's own The Hard Nut, which places E.T.A. Hoffman's tale in 60's suburbia. Among the other combatants are George Balanchine, Matthew Bourne, the Bolshoi's Yuri Grigorovich, the Pacific Northwest Ballet with sets and costumes by Maurice Sendak, and Maurice Bejart.

You can preview each work and see each choreographer's take on the Dance of the Sugar Plum Fairy, including Bejart's elegant black-tie version shown below, here.

Through December 19th, you can vote for your own favorite. The winner will be broadcast Christmas Eve at 7 P.M., CST, with a Christmas Day marathon reprising all six.

And if you have time before work (7:00 A.M. CST), or at your desk (10:00 A.M.) on Tuesday, December 2nd, you can catch Knowledge is the Beginning, a documentary on Daniel Barenboim's West-Eastern Divan Orchestra, which brings together young musicians both Arab and Israeli to play and perform together in a culture whose primal impulse is to keep them rigidly segregated.

It all makes me consider prying open my wallet and going beyond basic cable.