42nd ward Alderman Brendan Reilly on Tuesday sent out a link to a presentation with revised designs for the proposed 621 room complex of three new hotels to be built on the half-block in River North demarcated by Illinois, Clark, and Grand.

When compared to the earlier design, which we wrote about this past August, the elevations along Illinois Street and along a mid-block driveway are essentially unchanged. A major change has been made, however, in the design for the Aloft Hotel, at Grand and Clark, with a glass curtain wall replacing the previous windows set in a wall of precast brick. Here's the original Grand Avenue elevation: 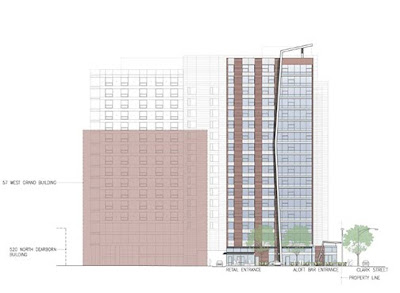 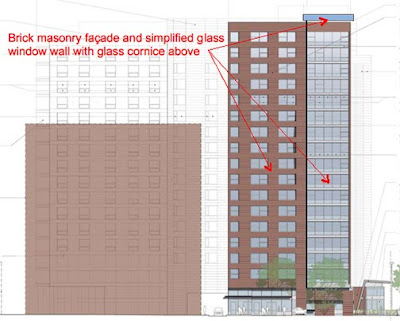 The vertical bracket that seemed a cheap rip-off of Jackie Koo's chartreuse lightning bolt on the Hotel Wit is gone, as are the brick pilasters with lighter insets that were reminiscent of the style of an old four-plus-one in Rogers Park. The stub of a curtain wall makes it kind of a pug, but the new brick wall design is much more attractive, and much more in harmony with the historic loft buildings in River North.

The change in the dominant Clark Street elevation is even more pronounced. Here's the original: 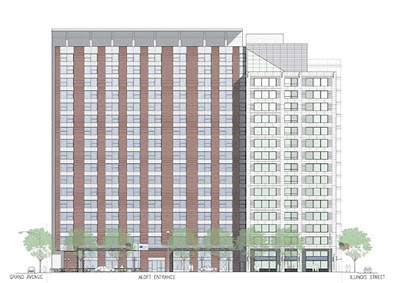 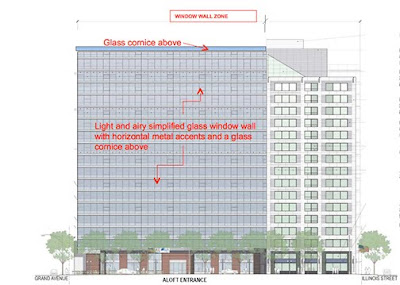 Here, all the previous brick and insets are ditched for a glass curtain wall. The raised arcade along the roofline of the original design is now a slender glass cornice. This is certainly a more elegant solution.

The interesting thing is that the original two story lobby structure seems to have been left untouched. Here's the previous design: 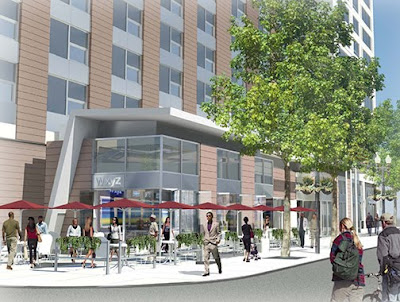 And here's the revision: 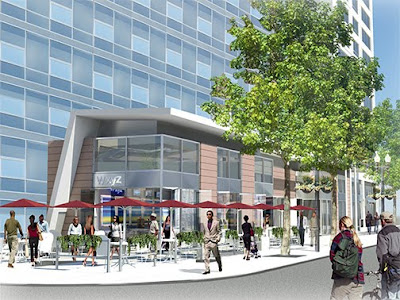 Against the curtain wall, that entrance structure now looks almost like a non sequitur. Not only does it have no visual relationship to the glass block behind it, it also retains that same bent bracket that mirrors a design element on the Grand Avenue elevation that now no longer exists. It's as if the workday whistle sounded and all the architects went home without really finishing their design.

This still isn't great architecture, but to me, it looks like a significant improvement. What do you think?

What do I think? A giant curtain wall does not make it good architecture. The giant curtain wall, like everything else, needs to be of good quality. Most likely the windows will be cheap and have a funny reflection on them, they will warp with the changes in preasure because they are cheap, the metal will be cheap and cheaply coated. It will be "River North Contectual", meaning cheap crap.

Your statement about the entrance, Lynn is perfect, "It's as if the workday whistle sounded and all the architects went home without really finishing their design."

Committee design is a horrible thing, and the City government is fully engaged in it. And sadly, they do their work with input from a diverse group of armchair designers who would never be considered for design commissions.

A sad state of affairs for the creative doers when the talkers opinions rule.

The entrance probably has more to do with aloft hotel's branding than anything else.