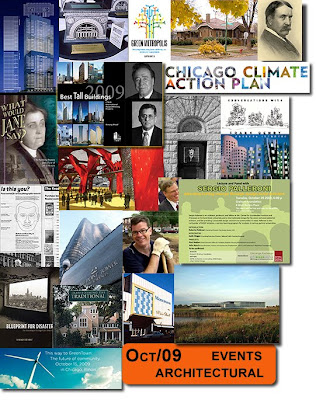 I'm a bit on the lazy side.

More to the point, I've been assembling an astonishing 75 great events for October, and I know I still don't have them all. There's CTBUH's two-day Evolution of the Skyscraper conference at IIT, with everyone from John Portman to Steven Holl, Arthur Gensler and Shangkar Nair, Adrian Smith and Mayor Richard M. Daley, to drop just a few of the names scheduled to appear.

Authors abound: Bradford Hunt on the Unraveling of Chicago Public Housing, Patrick F. Cannon on Unity Temple, Stuart Cohen and Julie Hacker on Transforming the Traditional , Joseph Schwieterman on Beyond Burnham, Barbara Isenberg on Conversations with Frank Gehry, and Janice Metzger on What Would Jane Say? (not Jacobs - Adams).

There are more showings on the excellent new documentary, Make No Little Plans: Daniel Burnham and the American City, and a reading of a new musical The White City: Daniel Burnham's Dream in Mies van der Rohe's Carr Chapel, newly restored at IIT.

On the 28th at CAF, there'll a panel with architect George Schipporeit, architect; William F. Hartnett, Jr.,Kevin Harrington, and Edward Windhorst marking the 40th anniversary of the iconic Lake Point Tower, and that night at CAF there's a panel on the future of Rail Travel in Chicago. And on Halloween, the most frightening thing won't be an appearance by Juan Antonio Samaranch, but the 23rd Annual Edgar Allan Poe Readings at Glessner House.

And, believe it or not, we're only scratching the surface. Check out all the great October events here.