So much for memory

We are the hollow men
We are the stuffed men
Leaning together
Headpiece filled with straw. 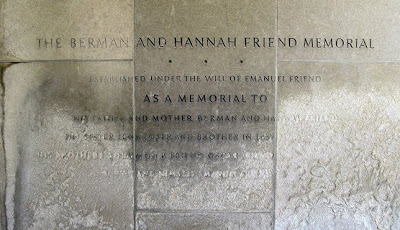 Already, the inscription had begun to be effaced by time, the loving gesture to create a place of healing, simple, open and eloquent, fresh air, stately trees, and beautiful plantings to ease illness's desolation, and nurture the convalescent. 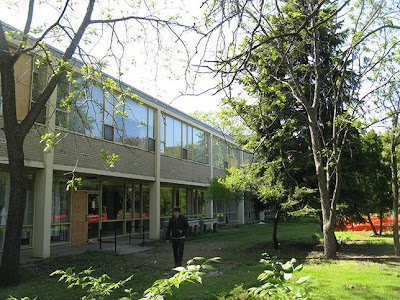 Now it's dust. All of it. Grahm Balkany of the Gropius in Chicago Coalition reported yesterday that the Friend Pavilion at Michael Reese Hospital, one of the small handful of buildings in Chicago co-designed by the great architect Walter Gropius, has been demolished.

And it's just the appetizer. There's still 28 more, an irreplaceable storehouse of International Style architecture, the sister to Mies van der Rohe's IIT campus. Watch them all die. Watch the wonderful trees be uprooted, the breathtaking landscaping trashed. Two structures saved as cheap Disney souvenirs, and one of the most historic, characterful places in Chicago ground into nothingness.

And for what? The Athletes' Village that was supposed to rise on the site is as dead as Chicago's failed Olympic bid. City officials talk about a new housing complex with affordable housing. There's no plan, no developer, no money.

So why the rush? Plain and simple: to end an argument. To destroy Michael Reese lest more people discover its quality and begin asking uncomfortable questions. Scorched earth as an expression of raw power. Is Paris Burning?

The Chicago of Berman and Hannah Friend is dead. It's now the city of the hollow men, and women. People who have run out of ideas, just as the mayor told us he had "nothing up his sleeve" for securing the city's future other than a mad Olympic circus. People who are selling off the city's future at bargain basement prices, just to get through the day. Who cry poor while diverting billions into corrupt TIF's that shower money on the connected few. People who destroy, just because they can.

Michael Reese: the new Block 37. Chicago: the new Detroit.
(Click on time for permalink) 1:35 AM

Trashed a useful airport in a mid-night raid, why should M.R. be any different? My guess is the next election cycle will give Chicagoans the opportunity to say how they really feel.

You might want to find a better picture if your trying to win sympothy. The building shown has all the character and charm of a turd left floating in my toilet. I can only pray we do the same to IIT - its even worse than Reese.

Always good hearing from my blind readers. Yeah, let's tear down IIT, as well. No matter that it contains some of the most universally respected buildings of the last 100 years. What do they know? You don't like it, so it must be crap. A Costco that looks like a colonial mansion would be so much better, don't you think?

When IIT can survive 250 years then it will have merit. But judging by the crapy detailing and inability for the buildings to hold up to Chicago winters, it's fair to say the end in is sight.

and the human race will have expired from its futile, foolish attempts to crawl back into the womb. having no other purpose than to replicate the fossilized past, it made a living future unnecessary.

Love this argument... as I see both sides of it. I read Dwell and admire modern architecture yet I live in a restored Victorian. Moral: Can't we both get along? Great blog by the way!
-Steffan

Crassus posed the issue, in somewhat different circumstances, in Kubrick's Sparticus: "Do you consider the eating of oysters to be moral and the eating of snails to be immoral? ... My taste includes both snails and oysters." I love the great architecture of the past. It should be cherished and preserved, but the mastery of a Bulfinch or a Wren were uniquely products of their time. You can't go home again. Each new generation must reinvent the world to the best of their abilities, in the spirit of their tine.

Meigs was an airfield used by plutocrats and now it's a a nice park open to anyone and a concert pavilion. That's movement in a democratic direction, even if the means of getting there were autocratic.

What will replace Reese (a hospital that certainly wasn't gold-plated and didn't only serve the finer sorts of people)? They don't even have a plan... just knock it down. It's literally nihilistic: nothing (vacant rubble-strewn lots) are better than something.

You can look all around the hospital for blocks and blocks to see the results of that guiding principle.


the exact same "justification" was used when priceless buildings were being torn down in the 60's and 70's. your shortsightedness is vile, and the reason things truly never change in this city. You are certainly entitled to your opinion regarding artistic merits, but that does not make you any less crazy than those who advocated for Sullivans to be demolished in the name of parking lots.

Sad, very sad. How will our children and their children see the beauty of historic architecture? Pictures only it seems. There should be a number of buildings in every city that need preservation no matter what. Not everything has to be modern these days. Look at cars, there are so many old cars that are worth more than 100 new luxury cars and yet they are not better in quality.

Tearing down an abandoned hospital is not putting Chicago anywhere near Detroit's level of decay. Have you been to Detroit recently? I have, and I've been doing so for years. The two cities are in no way comparable, and to try to do so takes away from your argument.

That said, I do understand the value in keeping historical buildings, but what do you suggest be done with the space? Leaving it abandoned, actually, is what Detroit did, and that's been a colossal failure. Better to keep the city moving forward and try to revive dying sections of it in any way it can rather than let it stay stagnant and kill more of the city.

Chicago, of course, is nowhere near what Detroit is today. No city is. The ruin of each city is different. The way the current city administration is selling off assets belonging to future generations for short term financial gain, coupled to a corrupt TIF system that siphons off billions in crucial financial resources - that should be part of a regularly vented, consolidated budget - into a shadow budget that that turns expenditures into favors for a relative handful of the connected few - all this is setting up Chicago to be locked into the position, in the not very distant future, of a bankrupt city that has fallen into an abyss without the resources to dig itself out. That is Detroit.

With possible exception of Ada Louise Huxtable, nothing is true just because someone says it is. Along with countless others, I've spent much time explaining why these buildings ARE good and are important, which I continue to find a lot more compelling than statements that have no other argument than that we should destroy all modernism just because it's not to the poster's personal taste.

I love how the arguement for preserving these buildings is that "we arent going back again". YES YOU ARE - your advocating saving something from the past rather than build something new. What if colonials ARE the future? What if advanced aliens come down and go straight for the Georgians and Federalist style buildings will the buff brick box people get sad? LOL.

PS those buildings are completely fugly. All a sensible person has to do is stand before a Sullivan and then a Reece and the choice is clear which to save. The logic is not the same in tearing these down. We do the future a favor.

And, frankly, if the aliens come, a preference for the Colonial style will probably be the least of our problems.