The Chicago-based Council on Tall Buildings and Urban Habitat releaed on Monday its annual survey of skyscraper construction. Three of the five tallest new buildings were in the U.S., with 2009's world's tallest being the SOM/Adrian Smith Trump International 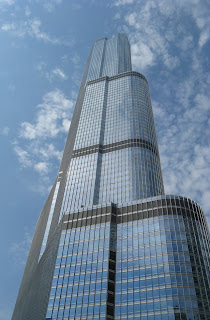 Hotel and Tower, at 1389 feet. Second is New York's Bank of American Tower, at 1189 feet, third, Beijing's China World Trade Center III, at 1083, fourth, Arraya Center Office Tower in Kuwait City (984), and fifth, Studio/Gang's Aqua, at 858 feet. Five of the top ten were in China, two in the Middle East, none in Europe. The only two using steel construction were by SOM.

Make up your own discussion on the questions of quantity and quality.