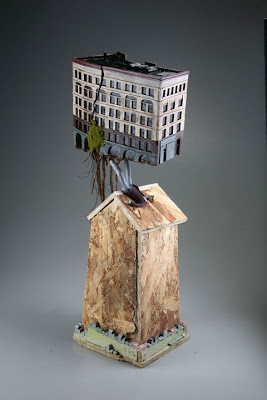 Burnham & Root's 1891 Luzon Building in Tacoma followed the usual trajectory. It was allowed to rot until the powers-that-be shed crocodile tears and said they then had no choice but to demolish it. Last month, in a perfect, ironic addition to the Burnham Plan Centennial Year, the city's Logical Diagram Gallery commemorating the event by putting up a Make No Little Plans show featuring the work of 18 local artists, including the piece pictured here, by Lynn DiNino, Burnham & Root Uprooted. You can see a Flickr set of photo's of some of the other work in the show, which benefited Historic Tacoma, here.

DiNino's work got me to thinking. What if the opposite end of her Luzon miniature was - not the anchor she created - but a metal ring? Could it lead to a new horizon for preservation in Chicago? Much as a developer can now acquire a city indulgence from having to include affordable housing in their megatowers by dumping cash into a city fund, we could have an ordinance that would allow them to demolish potential landmarks by paying into a program that would make tsotchkes out of the destroyed structures. Germania Club keychains, anyone? A Kaplan Pavilion snow globe?