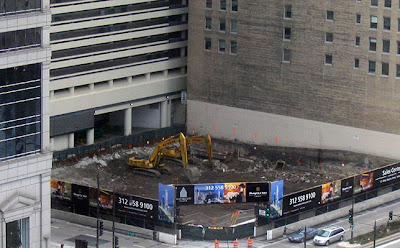 It all started out so bright and innocent, nearly four years ago, as the huge, fire engine red crane 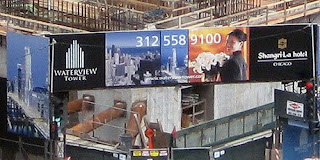 was constructed above the concrete core, a bright, wireframe cherub reaching high to full extension as it began to raise the Waterview Tower two and a half city blocks into Chicago's skyline, creating a new Shangri-La (the tower's hotel client), promising a place of grace and beauty. 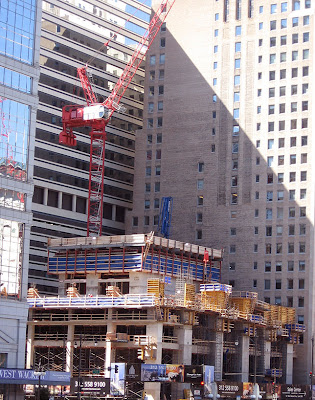 Chicago architecture and engineering firm Teng & Associates had decided to jump start the project with its own money. Like Garrett Kelleher and Shelbourne Development's Calatrava Spire, they took the rare and risky step of starting construction without having financing in place. Two years later, in mid-2008, the giant crane was arrested in its ascent at the 25th floor as the project, itself, staggered into the 25th hour. The money had run dry. Construction ground to a halt. 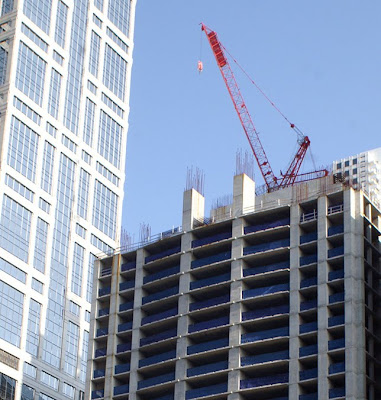 photograph: Bob Johnson
And there the great crane has remained stranded above three stories of rust-strained core, topped with a crewcut of exposed reinforcing rods like rows of pigeon spikes. 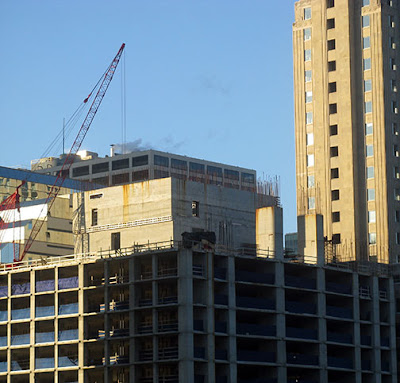 Until now. Marina City News has an excellent article on the deconstruction of the mighty Waterview crane, done by the erection of another, smaller crane. Early in 2009, the Circuit Court had declared the Waterview an abandoned property, after hopes of a $340 million cash infusion and takeover by a Chinese corporation fell through the year before. Central Crane Rental Service and Adjustable Forms, who both hold liens against the property, agreed to spend a reported $800,000 to dismantle the crane.

The Chicago Sun-Times' David Roeder is reporting that the building has a negative $15,000,000 net worth. It's now our own Lost Horizon, one of the two great memorials to Chicago's ought decade housing bubble. The Spire, concave, is a hole in the ground. Waterview, convex, is a 25-story concrete shell, a tombstone for the death of developer exuberance, irrational and otherwise.

For better or worse, it's one of the most distinctive structures in the city. What now? What should we do with it? Leave it rot, as a warning? Turn it into a parking garage? Aviary? Municipal mausoleum? Have Tracey Dear create a night time lighting scheme for it? Use it to mount the world's largest video screen from which Mayor Daley can make his pronouncements to the city? An eco casino? A childrens museum? Maybe we should have a competition. 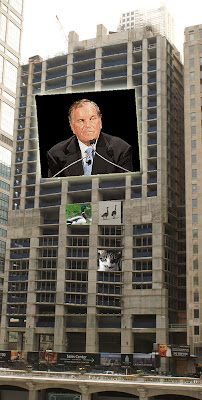 where exactly is this structure located? Help lend a hand to us clueless, former city-dwelling suburbanites.

I believe this is a great opportunity to create an arts & music venue for Chicago. This space most likely has a very interesting spatial and acoustical quality, something that should be explored.

I have witnessed many arts & music festivals in Europe that were held in large parking structures, underground bunkers, abandoned warehouses, large tunnels, etc. The experience was unforgettable and the music was exceptional!

So my solution for the partially built tower is to hold art and music events there. This is a prime opportunity to explore the benefits of this concrete mass with a wide range of music. It is a vertical playground that can revitalize the arts & music scene in this musical city.

Its central riverside location can be a focal point for a kaleidoscope of sound and culture.

I don't know exactly what should go there, but allowing it as a parking garage would be a huge loss for the loops. Adding additional parking in the loop will only encourage more people to drive into the already congested area and undermine the usage of public transit. I believe This option should be discouraged at all costs.

Theoretically, had the building been completed, the parking would have been used primarily for the occupants of the building. This would have reduced the negative impact on the loop, although it certainly would not have removed it completely.

i think they should finish what they started ... the finished tower will be a beautiful building, and the timing for completion now will be better than before (post-saturation point). they need to first settle all liens on the property & get it in the hands of someone capable of finishing it.

Waterview is on the northwest corner of Clark and Wacker.

Simple. Tear it down. We can put some people to work doing the demolition work and leave a blank slate for something appropriate in the future.

If you try to adapt an incomplete building to something else its always going to look adapted. Besides, that would probably cost more than demolition.

I prefer to erase it from memory.

Let Christo wrap it, for now.

The Art and Music Venue is an interesting idea, but I'm thinking more along the lines of "World's Tallest Cash for Gold Operation". Lets celebrate the failed business venture by bringing in the vultures which continue to sweep up any failed business space they can.

Its on the Southwest corner of Clark and Wacker, not the Northwest corner. Become a student of Chicago.

I don't do spelling and I don't do geography. Get over it.

very nice work keep it up! i have seen some new and used cranes for sale you may check them out