Konstantin Grcic at the Art Institute- a great show you shouldn't miss, through Sunday 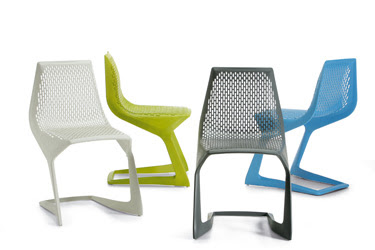 More on the Art Institutes's first-rate exhibition Konstantin Grcic: Decisive Design, in the first floor Gallery 184 of the new Modern Wing, which you have only through Sunday, January 24th to see. (Also the closing day for Caravaggio's The Supper at Emmaus.)

The Munich-based designer has made a career 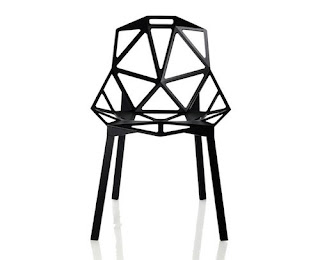 out of synthesizing the minimalism of modern design with a distinctive expressive sensibility through the use of color, form and material. His work is a bit more restrained than that of Ettore Sottsass, a key influence, but it also brings wit - and a bit of panache - to utilitarian objects, including a coat hanger with its own brush. As noted by curator Zoë Ryan in her excellent catalogue, Grcic's wine rack seems an updating of a Duchamp readymade, as well as "a tongue-in-check response to the emphasis on recycling . . ." Wanda's (that's the racks name) vertical design is actually more functional than horizontal racks that wind up being a collection of "precarious stacks"

An artist most at home with drawing - although he's more recently come to computer design - his work, everything from pens to pottery, with the usual chairs and tables in between, is both 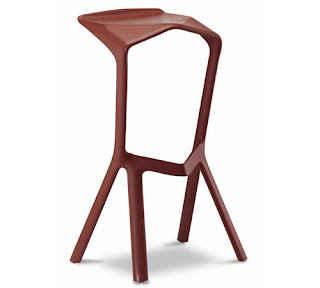 Works like the cement base Chair One , with its uncushioned wireframe, are surprisingly comfortable, as is Grcic's Miura barstool, which at first glance looks like the kind of perch you'd find in a sadistic doctor's office, but, in use, provides an entirely agreeable support. 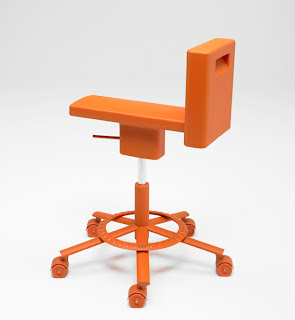 which visitors are actually encouraged to try out Grcic's designs for themselves, including his 360° chair, a colorful stool-chair hybrid that, again, looks a bit precarious but is actually quite stable and very suitable for people whose requires them to move around both through and around their workspace.

Formula 1 racing" and its perimeter is formed by a continuous row of seats consisting of two tires topped by a wooden platform. When you sit on one, it has the same slight give as a cushy chair.

Ryan's catalogue, part of the low cost series published by the Yale University Press, is actually the first one that doesn't come off feeling cheap. Her essay is excellent and extended, and the illustrations are not shifted to the 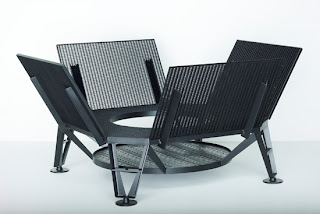 back of the book, but integrated with the text

If you haven't seen it, do try to catch this show before it closes this Sunday.

Grcic's interview with Interview. More photos of his work, and a monograph on KGID. And a podcast of Grcic discussing his work. Grcic on YouTube fielding frequently inane questions with intelligent answers.

Another interview, minus the hyperactive wrapper, here.

Design lovers you have to meet this Brand.
http://www.bocadolobo.com/
http://www.youtube.com/user/B0CAdoL0B0