Opera Chic reports that the great Philip Gossett, the University of Chicago scholar who has been a major force in creating critical editions of opera scores long mired in obfuscating revisions, has worked closely with Riccardo Muti to prepare a new critical edition of Verdi's Attila, restoring the 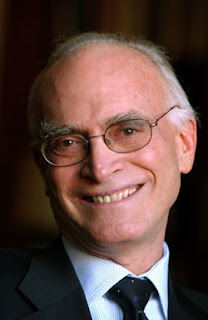 "more characteristic elements" of Verdi's original scoring, that will be used in Muti's performances at the Met. "Under Muti's baton," Gossett tells Opera Chic, "the orchestra sounds simply splendid: a chamber-music quality everywhere." The opera opens this Tuesday, February 23rd, with a run of ten performances through March 27th. It will be broadcast on the Met's radio network, including WFMT locally, Saturday, March 6th at noon.

Gossett officially retires from the U of C on Monday, when he will be honored for his "singular and colossal contributions to Italian opera studies that have led to the complete realignment of the relationship between the musicology of ottocento opera and its performance" with an all-star symposium, Divo and the Scholars in the afternoon, leading into an 7:00 p.m. recital with Joyce Di Donato and Vivica Genaux accompanied by conductor/musicologist/impressario Will Crutchfield on the piano. Both events in Mandel Hall. What we owe you is beyond evaluation.

"If there were such a thing as a Nobel Prize for musicology—and there should be, he would add to the luster of Nobel laureates," said Chicago Opera Theater’s general director Brian Dickie at the February symposium held in Gossett's honor. A true gift to opera! To read more about the event, feel free to check out our coverage here.