There'll be more players to be named later, but a number of names have already surfaced as part of an all-star roster for this Saturday, February 20's special afternoon edition of Pecha Kucha Night Chicago, part of a Global Day for Haiti with all 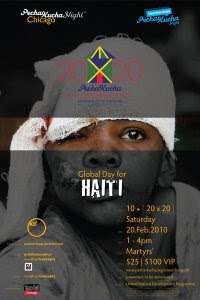 proceeds benefiting Architecture for Humanity's reconstruction efforts in that country. Presenters will include Katherine Darnstadt of Architecture For Humanity, Nadia Lemoine Andre - speaking passionately of her homeland, musician Jon Langford, architect Andy Warfel and designer Mark Taylor from the U of I, Champaign Urbana, architect John Ronan. Stayed tuned for more names later.

For February 23rd, a correction and an adjustment. The Community Interface Committee: Inaugural Meeting at AIA/Chicago actually begins at 6:00 p.m., and a scheduling adjustment has pushed back the Chicago Architectural Club event, Tristan d’Estree Sterk and Douglas Pancoast - The Quiet War: Architecture and Digital Technologies, one half hour - reception at 6:30 p.m., program at 7:00.

There are 30 great events still to come on the February architectural calendar. Check them all out here.