Please tread on me 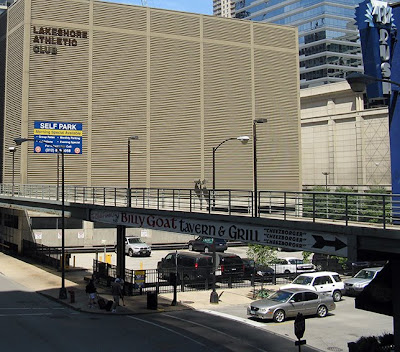 The Hubbard Street walkway that connected the Plaza of the America's, protected by its oversize statue of Benito Juarez, to Wabash Avenue, could never be called the height of elegance. Simple metal railings, a narrow catwalk, dangling uneasily above Rush Street below, with charming views of surface parking lots, shadowed streets, and the butt end of a large parking garage.

Still, it was a wonderful amenity. For being a flat city, Chicago has many man-made changes in elevations, often stitched together in the clumsiest way imaginable. Instead of noble transition, as in the Spanish Steps - in Rome, or in the proposal to unite Michigan Avenue with the upper level plaza of Illinois Center - we get side stairs, and back-alley bridgeways. Still, they work. 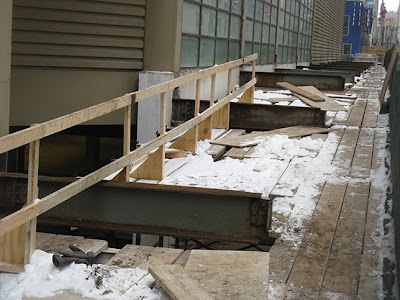 In place of grace, the Hubbard Street walkway fell comfortably within that abject pattern, but it maintained a nice feel of urban grit. For over a year, it's been shut down and barriered off. 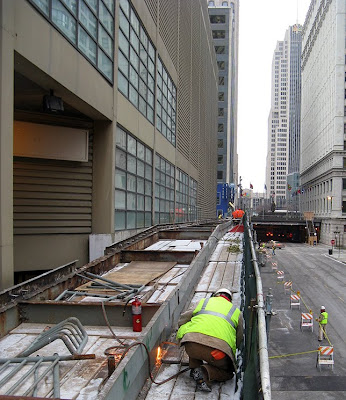 When I recently noticed men working on the walkway, and saw its now exposed supporting beams, cantilevered from the parking garage that also housed the now closed Lake Shore Athletic Club, I was thinking more of dismantlement than repair, but it turns out the walkway is to be fixed up and re-opened. The workman I ran into told me he was scoping out the support structure for a new steel surface he was soon to install.

That's great news!
Any rumors on what The LakeShore Athletic Club will be "rePurposed" as?
And- what became of the Restaurant,across the street from there-
on North Wabash- started - then never completed- ugly Dryvitt ,Fake Columns and all.....