Following an L.A. screening earlier this month, the long-awaited 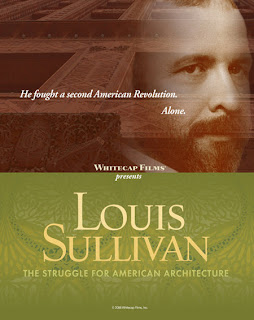 documentary Louis Sullivan: The Struggle for American Architecture, will have it's Chicago debut at the noon Sunday, March 14th, at the Gene Siskel Film Center.

The enticing excerpts from the 94 minute work from first-time director Mark Richard Smith screened in the fall of 2008, for both AIA Chicago and for the Chicago Chapter of the Society of Architectural Historians, used placeholder music from composers as diverse as Philip Glass (in the trailer above), Ralph Vaughan Williams and Richard Wagner. As you can tell from the trailer, most of the borrowed scoring was deft and haunting, although the use of Siegfried's Funeral Music for the images of the Auditorium captured less the joy of Sullivan's triumph than a sense of impending doom.

Now there's a new score by composer Michael McLean, whose work The Elements was recorded for Delos in 2006 by violinist Brian Lewis, with Hugh Wolff conducting the London Symphony, available on iTunes. On Facebook you can see this excerpt of the film, stripped of the narration, showing off McLean's music. Momentarily giving fright by starting off in that familiar, reductive Ken Burns kind of mode, it soon evolves into a much richer aural landscape. 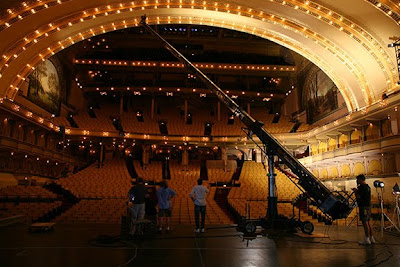 photograph: Doug Snower
The ambitious production took cinematographer Peter Biagi from Buffalo to Owatonna and points in-between to photograph Sullivan's surviving work. A 50-foot crane was deployed to capture up-close shots of the architect's inimitable ornament and stenciling in Chicago's Auditorium, the Wainwright in St. Louis, and Guaranty in Buffalo.

The documentary has its own website here, and Facebook page here. Only 200 seats are available for the March 14th showing at the Siskel, so tickets will probably go quickly. They can purchased via PayPal here. Suggested donation is $15.00.

The space you see and experience in the Auditorium is Adler's genius. Sullivan decorated it.

Sullivan and Wright, two of the falsest idols in architecture.

Light is not decoration. Nor is surface. A great room is more than the engineering, even acoustical engineering. Falsest idols? Shallow polemics and suspect judgment. If there had been no Frank Lloyd Wright, there would have been no John S. Van Bergen.

It seems Adler is always dismissed in the same way - that he was just a great "engineer". He was in fact, an architect. I often suspect history treated him the same way, as a Jew, the way it treated Marion Mahony as a woman.

Wright and Sullivan are in many ways self created icons, mainly because they spent a lot of time writing their own, and in effect, everyone elses histories/biographies, beefing up their own images while tearing everyone else's down. In Wright's case, two differents versions of his autobiography you might think would make anyone suspect.

Adler would probably have had an admirable career without Sullivan. I not sure the reverse would have been true.

Indeed, Van Bergen might not have been a Prairie School architect if he hadn't hooked up with Wright, but he probably would have been an architect in any case. But you are right, his history has been written on the coat-tails of Wright.

"Frank Lloyd Wright" as history, is many layers of reality intertwined with equally many layers of mythology -- often difficult to tell which is which. As with Sullivan, it is as much religion as it is history.

Some amusing history of Wright that I learned from tour guides on my many visits to the Home and Studio in Oak Park--Frank Lloyd Wright invented: the casement window, radiant heating, the horizontal line (that's my favorite!), and the "Prairie style".

Other common deviations from the facts that Wright's house's never had had basements or attics(they did) because "he hated them", that the draftpersons he had in Oak Park were his "students" (they were not), and that they were all copying him ( they were not and in many cases it was equally the reverse.) A large volume could be written on just the easily refutable mytholgy.

Those are always those factual issues, which can't be ignored, since, in my view, history should be based first on the discernable facts, then followed by interpretaion - all the other more etherial stuff rests on the facts.

There is no denying the beauty of the buildings, an appreciation I'm sure we share completely, and a beauty that you are much better at describing and presenting! But I differ with many architectural historians when they start to get a little too religious about the characters.

And I differ in many cases with attribution, especially with a lot of the stuff coming from Wright's office during the Oak Park years. After all, the idea of his supposed early genius should be based on those attributions (think Griffin, Mahony, Drummond, Van Bergen, and yes, even Isabel Roberts - not just a "secretary" but an architect.).

I can hardly think of a greater polemicist than Frank Lloyd Wright! You might say he invented it. ;-)


And you have a great blog!

I agree with all your comments about FLW since I too, was a former interpreter for the H & S in OP. Yes, he was genius in his designs but one has to question the authenticity of his creations. There was a prairie style movement that was going on with Greene & Greene in California, Charles Rennie Macintosh in Scotland, Elbert Hubbard in East Aurora, NY, etc. FLW was a part of that movement; he did not start the movement despite what some might think. I do think that there would not have been a FLW without Louis Sullivan and that Sullivan had been put in the shadows by Wright's self-grandiose promotion of himself during their lifetimes. Let's not forget that Sullivan's ideas and principles influenced not only FLW but architects like Mahoney and Griffin. Marty, you did such a wonderful job on your book about Van Bergen that you should consider writing a book refuting some of the alleged facts about FLW. I, for one, would definitely read it especially since the book, "The Fellowship" opened my eyes to what Wright was all about.