On Thursday, June 3rd, Ross Barney Architects will be offering a special preview, for "architects, artists and 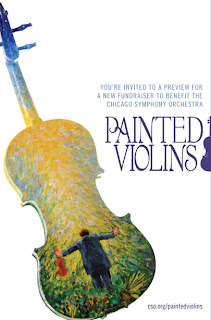 designers", of Painted Violins, 34 violins transformed into artworks by an array of the city's leading artists, architects, and designers. The pieces are going to be sold off in a June 24th live auction benefiting the Chicago Symphony, which will also include cocktails, live entertainment and a silent auction.

Ross Barney's own contribution, Pizzicato #1, is a witty amalgam of a violin

and Chicago's iconic Picasso Statue (minus the Blackhawks cap). There's also Mono-Chromatic from Studio/Gang, Rhapsody, from Nicolae Ceausescu's former official portrait painter (reformed), Alexandra Darida, and Terry Karpowicz's oxidized Sonata in the Age of Iron. Rose Frantzen says of her Violin No. 1, that "I was divided on painting the violin because I found the wood so beautiful-- so I started in a direction with the charcoal and opted to leave it."

the other hand, Robert Engel transforms his violin into a tin-man extravaganza in Robot Rhapsody, and John Himmelfarb, in his Double Cadenza, dismembers his into two neat halves, the bottom of which

serves as a brush pot. Donna Lapietra's sleek, ebony iViolin rather dispiritedly replaces the strings with an embedded iPod. There are also contributions from artists such as Nick Cave, Mr. Imagination, Mark Campbell, Ann Ponce, the Zhou Brothers, and more.

The Thursday, June 3rd event at Ross Barney Architects is from 5:30 to 7:30 p.m., with music by Loredo Salazar. RSVP to Peg McCarron via email.