Buildings that are a Lot Better than you've Heard: The Max Palevsky Residential Commons 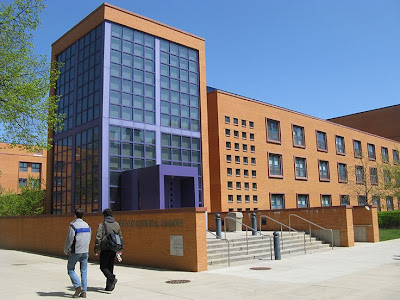 Philosopher, computer geek and philanthropist Max Palevsky died this week. The son of Russian emigrants, he was born in Chicago in 1924, growing up in Humboldt Park. In 2000, he gave $20 million towards the cost of what would eventually be named the Max Palevsky Residential Commons at the University of Chicago, designed by architect Ricardo Legorreta. "Just doesn't work," was the Trib's Blair Kamin's imperial dismissal after the opening. We thought it was a good time to take another look and see how well his opinion holds up. Read all about it, see the pictures and judge for yourself, here.
(Click on time for permalink) 12:01 AM

Seems to me that discussion is impaired ab initio with the use of the adjective "imperial" in describing Blair Kamin's review.

Of course I almost always agree with BK. So letz start with the choice of words.

If "just doesn't work" isn't an imperial dismissal, as if he were writing about a high school student's term paper rather than a major work of architecture, I don't know what is.

i tend to agree with you those dorms have grown on me over the years.
Having seen it right after its completion i was immediately turned off by the intensity of its colors and the blandness of its form. But after the building has aged a bit, and i have as well, im appreciating its simplicity a bit more. Im also on board with you about Regenstein. Though ive never been inside, its exterior is really interesting. FYI, you can find more info and images of the future Regenstein library addition at murphy/jahn's new website...

The problem with the Palevsky dorms is less to do with the outside than with the inside. Legorreta really did not consider that students would be living in these spaces and not architectural fans.

Inside, the buildings are rife with problems. First, UChicago is known for its house system that organizes residences into "houses" with each having their own activities and lounge space. Palevsky puts the lounges in terrible locations that are on the outskirts of the their respective houses. Rather than bringing students together by attracting them to the lounges, the locations keep students away. The student dorm rooms also have small, useless foyers that connect a suite of two dorm rooms with one or two bathrooms. Of course, the problem with this is that the foyers leave two doors between the hall and a dorm room, further keeping students apart from one another and giving the dorm a hotel feel.

The other problems are smaller things, but significant when considering who you are building the space for. The dorm was originally built with no bookshelves. Only after much fighting with the University did Legoretta add 2 small shelves to each room. These are nowhere near enough for any college student, let alone nerdy UChicago students. Also, he did not design recessed sprinkler heads so inevitably someone plays ball, hits a sprinkler, and floods a floor at least once ever few years.

I don't have many issues with the exterior of the dorm since it does brighten campus. However, I consider the dorm a failure and actually worse than you've heard because the "starchitect" forgot who he was designing the building for. Check out the new South Campus dorm if you want to see a dorm that balances architecture and function and note that UChicago did not go for a "starchitect" again.