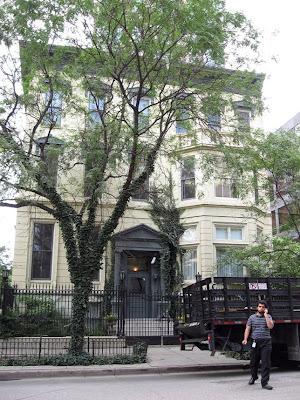 Other than harvested grain, the McCormick reaper's greatest production was family relations and their mansions. The north side was crawling with them. Founder Cyrus's 1879 palace at 676 North Rush bit the dust in the 1950's; nephew L. Hamilton's 4-story Italian palazzo at 100 E. Ontario is now the two-story Lawry's Restaurant.

Brother Leander's mansion at 660 N. Rush, however, endures. Built as a double house for Leander and his son Robert Hall, it was combined into a single residence after the father's 1900 death, and became the storehouse for R.H.s ever expanding collection of fine art. After the son's death in 1917, the building drifted. Started in 1965, it began a nearly 30-year run as the restaurant Chez Paul, and after that, offices for the Encyclopedia Britannica.

Now the scaffolding's coming off from it's latest exterior rehab, and the previous painted cream facade with battleship gray accents has reverted to a more au naturel, uniform, clay-colored appearance. Better or worse? 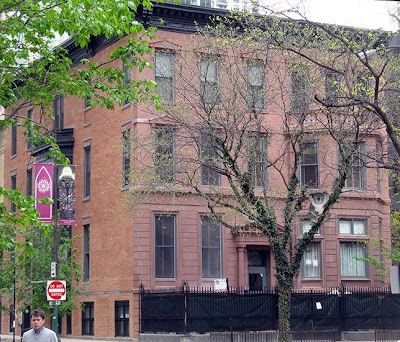 A rather nothing of a house is drearily returned to its original 19th century sad-sack natural brownstone or is it applied "brown stone" the stuff they use all over NYC to repair the Brownstones?
Either way the house looked prettier in cream as do thousands of stucco townhouses with shinny black doors all over London...just sayin'.

Agreed with above. The before is much better than the after in my opinion. It stood out better, now it just blends in and will be ignored.

I disagree, the building looks much better as a brownstone. Thanks for the post on my great-great grandfather McCormick's house.