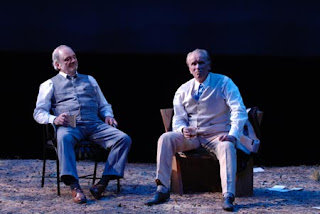 able to shake, was at the Goodman in Chicago to play Louis Sullivan in Richard Nelson's Frank's Home. The playwright's Sullivan was a closeted gay man, a desperate, drunken has-been, traveling to California to beg the play's central character, Peter Weller's Frank Lloyd Wright, for a job. Yulin, a big bear of a guy, had little in common with Sullivan physically, but his skill has actor created a grounded, recognizable human being with far more depth than Nelson's writing of the part had provided.

There was, I believe, some talk that Yulin actually wanted to do a play about Sullivan, and while that didn't happen, he's turned recidivist - architect-wise - and is currently appearing off-Broadway as Mies van der Rohe in the June Finfer play, The Glass House, about the creation of Farnsworth House, Mies's modernist masterpiece in Plano, Illinois.

The only review I've come across so far describes Yulin's performance as bringing "an excellently calibrated mix of egoism and humanity to van der Rohe . . . there's a courtliness to the actor's 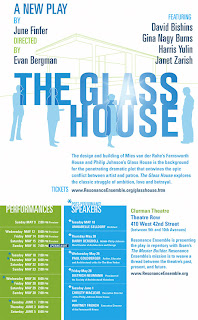 portrayal, as well, that makes van der Rohe more likeable than he might have been in other, coarser hands." As in life, Finfer mixes in Edith Farnsworth and Philip Johnson. Complications ensue.

A production of the Resonance Ensemble, The Glass House is running in repertory with another play having an architect, Halvard Solness, as its lead: Henrik Ibsen's The Master Builder, although, unlike Solness, Mies never, to the best of my knowledge, fell off one of his own towers. The two plays run through June 5th at the Harold Clurman Theatre on 42nd, and the tickets are dirt cheap ($18.00!) I doubt I'll be getting to New York, but if you do, please send me your comments if you see either play.

A number of evenings also include post-performance talks by such luminaries as MOMA's Barry Bergdoll on the 20th, New Yorker critic Paul Goldberger on the 26th, SAH President Dietrich Neumann on the 28th, and a tag team of Philip Johnson Glass House Executive Director Christy MacLear and Farnsworth House Executive Director Whitney French on June 1.

As to Harris Yulin, where does he go from here? Unconfirmed reports have him next shaving his head to play global stararchitect Rem Koolhaas in Zhang Yimou's production of Duncan Sheik's rumored seriocomic opera, Put Down Those Fireworks!