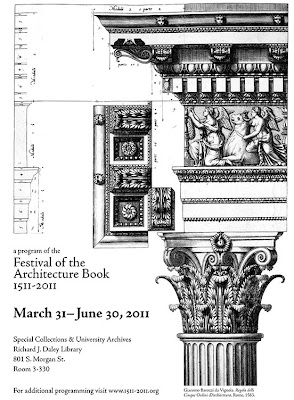 click images for larger view
On May 22nd, 1511 - at 3:00 p.m., I think, as he always liked to take the daily bacteria count from the Grand Canal around 2:00 - architect Fra Giovanni Giocondo published the "first illustrated architecture book ever to be printed."  There was so much excitement that La Schiavona put Titian on hold just to go and take a look.  By 4:00 p.m. Giocondo's shop was packed.  By 5:00 p.m. it emptied out at word of a team of jugglers arriving at the Piazza San Marco, and by 6:00, after  it became known that Giocondo's product was nothing new, but a reprint of a 1,500-year-old tome by Vitruvius, the book was showing up on the remainder tables right next to a stack of copies of  la Divina Commedia, Illustrated for Dogs.

Chicago's cultural institutions have, nontheless, taken the 500th anniversary of Giocondo's publication of De Architectura libri decem, to put on the Festival of The Architecture Book 1511-2011.

The Festival of the Architecture Book will demonstrate the broad range and intrinsic value of the illustrated architecture book as a work of art and imagination. By having numerous venues under separate curatorship, the series hopes to present both a survey and in depth views on specific aspects of the medium. Over 300 books, and other related materials will be displayed, featuring highlights of the Western tradition, including many of Chicago interest. The programs surrounding the anniversary of the 1511 De Architectura libri decem celebrate the history of the illustrated architectural book and give rise to questions about its future.

Through June 30, the UIC Richard J. Daley library, 801 South Morgan, is offering up Illustrated Architecture Books: Highlights from 500 Years of Theory and Practice a selection of architectural books from the past 500 years from Venice, Rome, Paris, London, Antwerp and Chicago.  The library is open Monday through Friday 10:00 a.m. to 4:30, Wednesdays to 7:00.  Northwestern University, Loyola, and the U of C are also offering up their own exhibitions, with From Vernacular to Classical: The Perpetual Modernity of Palladio opening at Notre Dame June 10th, and The Story of a House opening at Glessner House on June 1st.

Are we now at the end of the line? Do printed architectural books - any more than any other kind of book - have a future in our digital age? Will they be cramped onto an iPad, or blossom in the expanse of a wall-size flat panel? Will the illustrations of today's architectural books become postings on Flickr and Facebook, and their theoretical musings 140 word tweets? Or has it happened already?

You can check out the festival and festival events on its website, here.

LOL. There's a terrific booklet that accompanies the festival and can be picked up at man of its venue.

By which I menat to say: There's a terrific booklet that accompanies the festival and can be picked up at many of its venues.