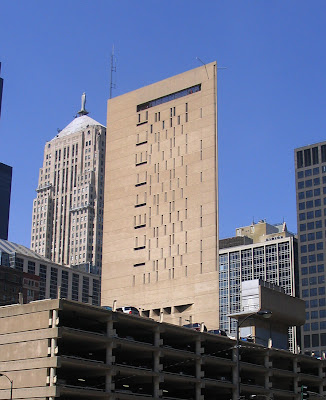 It's been over 35 years since architect Harry Weese's triangular, 27th-story Metropolitan Correctional Center was completed, and it's hard to imagine Chicago's south Loop skyline without its distinctive presence.  Journalist Dan Weissmann has just taken another look at Chicago's Jailhouse Skyscraper for Roman Mars' 99% Invisible website, with this audio report of the structure then and now.


Podcast Powered By Podbean
One of the interview subjects is architect Jack Hartray, who was project manager on what was then called the Campbell Correctional Center.  "The mayor didn't want this building in the Loop," recalls Hartray, "so there was a lawsuit.  I think it took them about 12 minutes to get the thing kicked out of court.  It was impossible to find a judge who wasn't in favor of building the building."

Hartray has fond memories of the quality of the design, "Harry sort of viewed this from the standpoint of accommodations on sailboats.  The furniture was all built in, so you could really do pretty nice furniture . . . It's not a bad place to stay.  We were doing a hotel at the time, and this was better than the hotel." 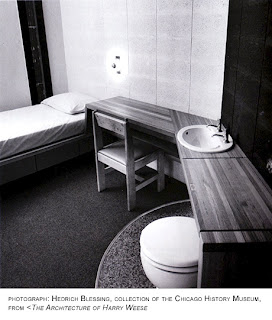 The concrete tower functioned  less as a long term retention facility than as a holding pen for suspects going on trial at the nearby Federal Courthouse designed by Mies van der Rohe.  Since none of the residents were yet convicted, a way was sought to avoid the brutal nature of most jails.  According to Kathleen Murphy Skolnick, co-author with Robert Bruegmann - who's also interviewed in Weissmann's report -of the new book, The Architecture of Harry Weese,


Each 7 x 10 foot room contained a single platform bed with drawers for storage underneath, a desk, shelves, and a chair . . . Carpeting eliminated the need for acoustic treatment. . . The butcher-block furniture chosen for both the individual rooms and the common areas created a residential quality and was easy to clean and hard to destroy.  A bright red, white, and blue color scheme replaced the drab gray and sterile white so frequently found in the conventional correctional facilities.

The building's facades are animated by a series of slits, actually floor-to-ceiling windows, beveled to bring the the maximum light, but just five inches wide to come in below federal guidelines where bars would begin to be required.

While Weissman was unable to gain entry to the interior of the building for his report, he did interview someone who visits it regularly, prison reformer Phil Carrigan, "Show me the hotel," he says, after hearing Hartray's remembrances.  Carrigan says today's detainees would be "aghast" at such rosy descriptions, given the facility's current condition. "MCC is not a spa", he says. "It's very drab, gunmetal gray."  Those carefully designed furnishings?  "They're gone.  The bunks are steel, two-tiered structures - no wood."  The floor-to-ceiling glass slits?  "The windows are generally frosted.  Doesn't allow for sunlight to come in. The place is old.  It's definitely undergone some changes.  None of them have been for beautification."

Weissman has come up with a great portrait of good intentions curdled by time.  Listen to it here.