[Postscript: 12/10/14] Crain's Chicago Business reported that the Allsaints store would be replaced by a T-Mobile flagship store. 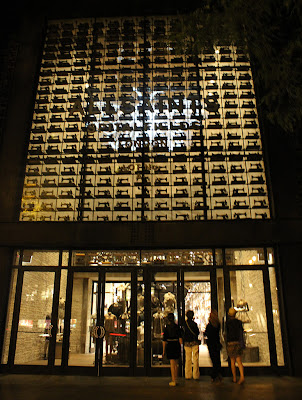 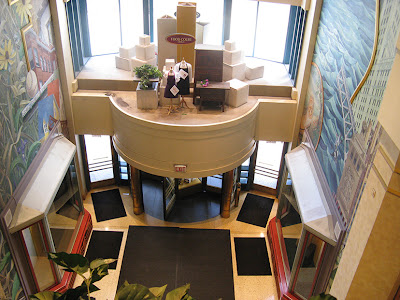 . . . the soaring entrance to the spectacularly unsuccessful Chicago Place vertical mall on North Michigan Avenue, done up in a style that might best be called Prairie School meets glitz generic.  It was finally put out of its misery about two decades later.  Dominating the entrance were two 42-foot-high murals by Thomas Melvin, depicting Chicago in broad strokes and superbright colors . . . 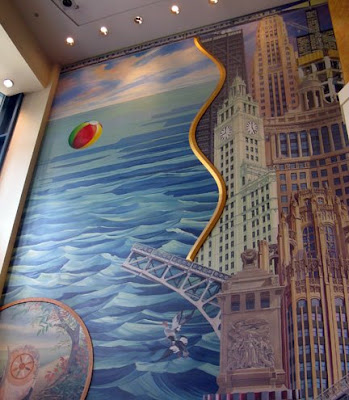 This is what the same wall looks like now . . . 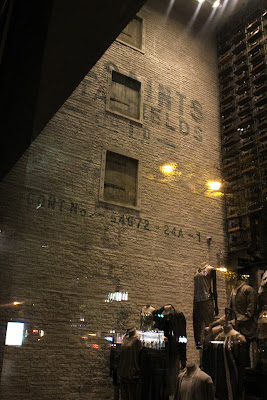 It's part of the just opened Chicago outpost of AllSaints Spitalfields, the British clothier.  Like Chicago Place, it was born in the 1990's, but there the comparison ends.  By the time it opened, Chicago Place was upholding traditions that were already dead; AllSaints was defining what was to come.


our mission is to create a brand that blends cultural, fashion and music into a potent formula of desirable clothing that expresses individuality and attitude.

AllSaints doesn't advertise, depending instead on word-of-mouth, and it keeps in place a kind of corporate omerta about itself.  Staff is forbidden to speak about the business - you can make up a far better back story for the Mise-en-scène in your own head.  One description of the chain's design mantra is "crumpled fabrics and clothes that often to the untrained eye might appear to be lopsided."

The design of the new 11,000-square-foot Chicago flagship is surreal and spectacular - Dickensian Gothic.   It's been described as being modeled "after an industrial European rail station," but it seems much more like an abandoned factory, scrubbed to a high polish that never existed in its original incarnation.  According to a great account by Tim Girvin of the evolution of the Allfields Spitalfields brand and design of its Seattle outpost . . .


“The All Saints store is an expensive monument to the distressed style of decoration: the brickwork is exposed, the wood flooring carefully aged.” According to friends working as the architects of record for the Seattle location, the concept of detailing that degradation is one of careful staging — teams working for weeks on the blasting and chiseling of every single brick. All Saints Spitalfields becomes in this light, a kind of set design, a cinematic production. 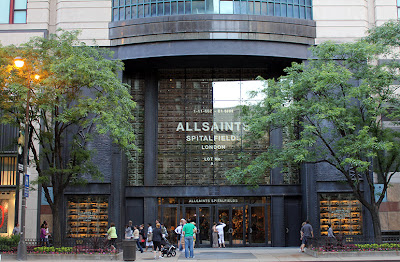 In place of the Mag Mile's long-faded pretensions to high elegance, we get a massive heavy-metal denture jammed into the untoothed maw of a Po-Mo relic. 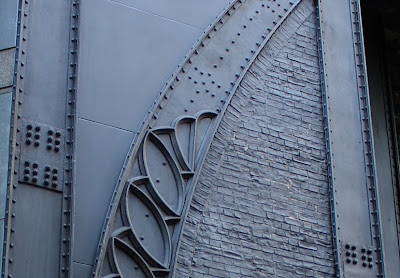 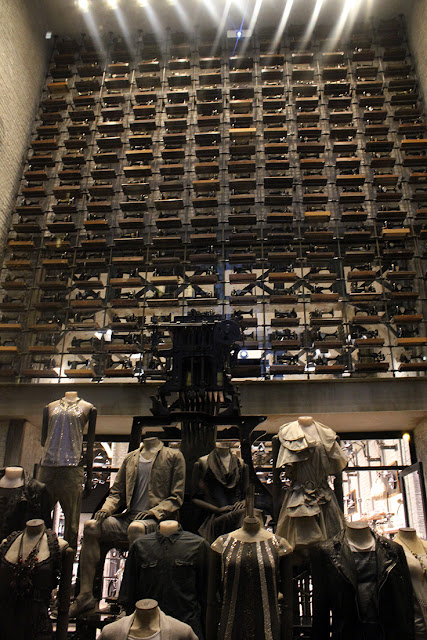 The same brick, unpainted, sides the 42-foot-high entrance foyer.  It's all dominated by the back wall, a soaring-to-the-ceiling grid of hundreds of antique Singer sewing machines. Along with the ram's horn, they're signature motifs of the chain and its fashions. 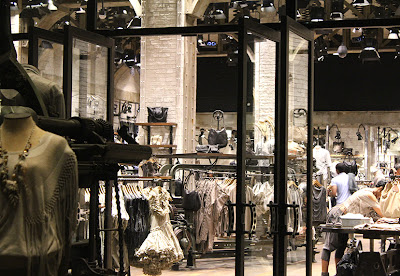 The selling space beyond has the same distressed brick walls, even on the tall, squat columns.  Bolted metal pilasters climb up the walls, to a metal molding course topped by squat brackets.  Furnishings are similarly retro-industrial - heavy metal tables, often wheels of uncertain function, interlocking gears in framed black panels mounted high up on the walls, an iPad held in place by a thick, thumb-screwed wood block.  Everything has been painted a light buff.  As with most of the apparel on display, the palette is so constrained you feel as if you've fallen into sepia.

Today, sewing machines tend of be not black but white, but the basic principles of manufacturing remain in the factories in China and other developing countries where almost all the clothing we buy is made.  Perhaps a century from now, we'll be purchasing our apparel in stores designed in a kind of nostalgic replication of the typical contemporary industrial setting  you can see here. 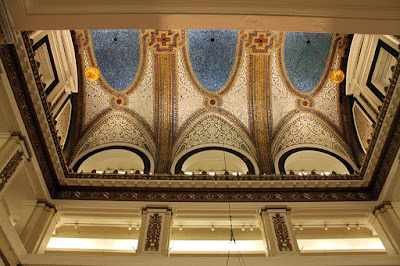 Retailing as stage set, of course, is nothing new.  A century ago, department stores attracted their newly-middle-class customers with palatial architecture and furnishings, repackaging the gilded age luxury of the robber barons for the mass market. 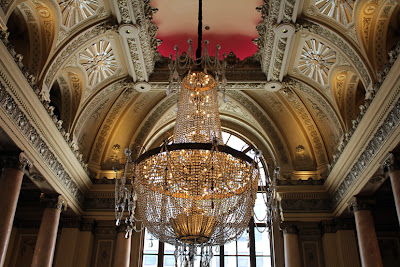 In the 1920's, movie theater operators brought in audiences with the fantasy of having been given the keys to an Egyptian temple or the Palace of Versailles, examples of an authoritarian world order in which the middle class was limited to the bureaucracy serving the royal court.  Now we've apparently graduated to a super-scrubbed, nostalgic recreation of a brutal industrial past that our ancestors struggled at great sacrifice to transcend.

"And other than that, how did you enjoy the play, Mrs. Lincoln?"  Comedy=tragedy+time.  Certainly a parallel formula holds true for high-end retailing.  As brutal as the early industrial age may appear to us now, at the time - to capitalist and laborer alike - it was an age of optimism, of moving beyond the Malthusian uncertainty of rural life. 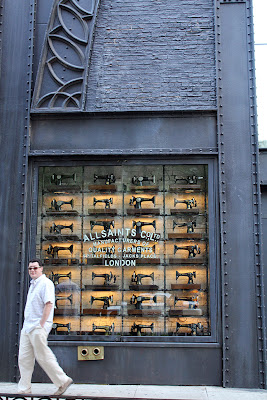 AllSaints Spitalsfield could be a mainstay or a fad.  Just this past May, running dry of cash after having been owned successively by an Icelandic firm that failed, and then a leading Icelandic bank, that also failed, the company was acquired by British private equity firm Lion Capital.

In either case, they'll be plenty of time later to mine the deeper, darker meanings of AllSaint's Terry Gilliam/Mark Romanek vision of the perfect selling space.  For now, be sure to check out the trippy architectural concoction that has Potter Palmer and Arthur Rubloff turning over in their graves.  But then again, Rubloff was always a snappy dresser . . .

It seems to be an influence on this store's interior.

that's a great point that I didn't get around to covering. AllSaints has a long history of working with musicians, including their "Basement Sessions" recorded, appropriately enough, in a space beneath their design studios.

The lighting, the music, the ambiance, the fact that nothing in there is really designed for anyone above the age of 32.

It's an awesome space, though I'd love to see what's become of the upper levels of the mall. Something tells me it all looks relatively the same as it did before--just dustier and rawer.

A note: the interior large girders and cement ceilings are Hollywood-level scenic trickery. All plywood.

Wonderful, Chicago now has a clothing store catering to i-puppets! Maybe they can set up an alter in the store too. Very dark place wooing unsuspecting customers just like the musicians that they cater to. Go back to Britain please.

Wonderful, Chicago now has a clothing store catering to i-puppets! Maybe they can set up an altar in the store too. Very dark place wooing unsuspecting customers just like the musicians that they cater to. Go back to Britain please.