IMPORTANT UPDATE:  At Northwestern's request, the item concerning preliminary landmark designation for Bertrand Goldberg's Prentice Hospital on the agenda for today's meeting of the Commission on Chicago Landmarks has been removed. 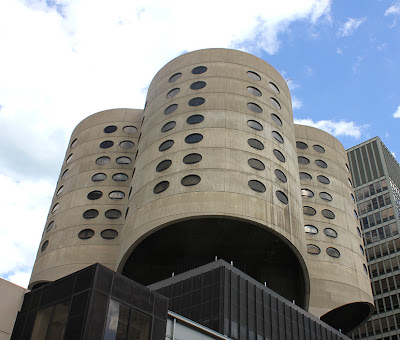 click images for larger view
Today, Thursday, June 2nd, at a meeting to begin at 12:45 p.m., in Chicago City Council chambers on the second floor, room 201-A of City Hall at 121 N. LaSalle, the Commission on Chicago Landmarks will consider preliminary landmark designation for Bertrand Goldberg's iconic Prentice Hospital, which Northwestern is planning to demolish in order to create - a vacant lot.  For reasons too embarrassing to detail, I won't be able to attend, but all of you who can, please show your support.  If any of you will be tweeting from the meeting, let me know, and I'll post a link to your Twitter feed.

It comes down to this: What kind of city do we want to leave to our children?  Look at the buildings on the Northwestern Memorial Hospital campus.  Is there a single one, other than Bertrand Goldberg's Prentice, that you'd consider a legacy worth passing down?   Galter and Feinberg are massive fortresses.  The new Prentice has it's best face facing out, on Chicago; facing in, on Superior, it offers only a brutal, graceless arcade of oppressive scale.  And the other buildings?  How could the healing powers of a great hospital, offering so much hope, encase itself in such a veneer of faceless despair?  Without those optimistic, gently rounded forms of Bertrand Goldberg's Prentice towers, there 's no contrast, no relief from the medical complex as an architectural necropolis.

If Northwestern is allowed to destroy Prentice, what do we get?  Nothing.  Just an extension of the two-block-square gravel yard just across the street, that's been there since Lakeside Veterans Hospital was demolished two years ago.  There is no construction on the boards, nor expected any time soon. Nothing will be left behind but the palpable ache of absence. 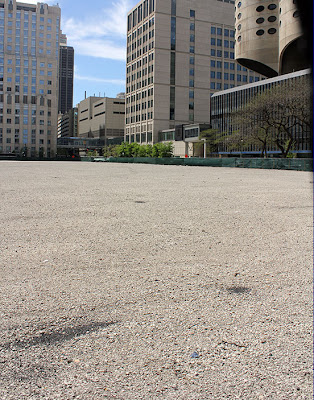 This fall, the Art Institute of Chicago will open a highly anticipated retrospective on the architecture of Bertrand Goldberg.  If Northwestern gets its way, at the very same time the exhibition brings the wonder of Goldberg and of Chicago architecture to a global audience, photographs of Prentice's destruction will damn the city in the eyes of the world.

Two faces, deeply contrasting.  Which one will be Chicago's?