According to Kenan Institute director John D. Kasarda, Korea's Songdo City is the new Eden, a "Smart City" in which the government of South Korean filled in nearly six square miles of tidal wetlands on a migratory bird flight path and turned them over to developers as a tabula rasa to create from scratch a massive city "built by companies for companies." 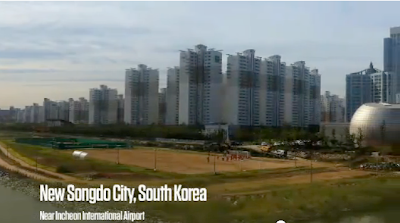 It's super green, and hyper-wired, and if the full-press PR blitz touting its wonders reminds you of the initial euphoria over George Pullman's 19th century versions of the perfect company town on Chicago's south side, you're not alone.  But don't worry yourself; resistance is futile.  In the time-honored tradition of academics who have found their own version of the future and can imagine no other, Kasarda sees the model of Songdo City as our future "whether we like it or not."

Kasarda, author of Aerotropolis: The Way We'll Live Next, will be discussing his work at an October 24th event sponsored by the Chaddick Institute.

It's one of two events just added to the October Calendar of Chicago Architectural Events. This Wednesday, October 19th, at Crown Hall, 11:30 a.m. IIT, Carsten Krohn will be discussing The unknown Mies, the "crypto-classical" houses of the architect's early career.

There are still over three dozen events to come this month. Check them all out on the October 2011 Calendar of Chicago Architectural Events.