What's thinner than a facadectomy, that dubious "preservation" process that strips off the facade of a soon-to-be demolished building and slaps it onto a new structure?  How about a fritectomy?

It's part of the plan for a new facade at 618 South Michigan, a topic on the agenda of the next Grant Park Advisory Council meeting, to be held Wednesday, October 26, 2011 , 6:00 to 8:00 p.m. in the 8th floor meeting room of the Chicago Park District Headquarters, a/k/a Harry Weese's Time-Life Building, 541 North Fairbanks (enter on Ohio).

The major item at the meeting will be Michael Van Valkenburgh Associates' presentation of the revised plans for North Grant Park/Daley Bicentennial Plaza.  In May of 2010, Van Valkenburgh gave a presentation of his views of park planning even as the Park District's Gia Biagi mandated than any plans would have to accommodate a new building for the Chicago Children's Museum, the pet project of movie producer Gigi Pritzker that a flailing and exhausted Mayor Richard M. Daley tried to ram into the park while vilifying as racists and child-haters anyone who dared oppose it.  Flash forward to today: Daley is gone, Pritzker is gone.  The opponents prevailed.  A stake has been driven into the project's heart, and the Museum is negotiating to continue at Navy Pier and expand its presence.  Will this give Valkenburgh more freedom to come up with something spectacular,  like his new Brooklyn Bridge Park, which balances playlots with a salt marsh? 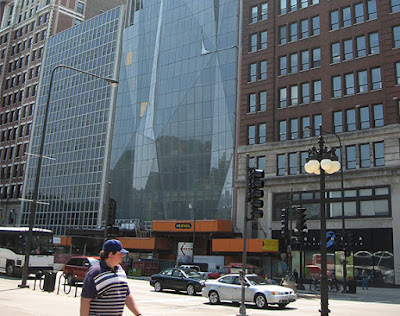 But back to 618 South Michigan.  It looks like the original intrusion of modernist structure into the 600 block of the neo-classical Michigan Avenue streetwall, anchored by Marshall & Fox's Blackstone Hotel at the south, and the Harvester building to the north, with the Blum's Vogue building, constructed by Florence Ziegfeld, Sr., in between.  Actually, however, as related in an excellent post on John D. Cramer's great HPRES-ist blog, 618 South Michigan was actually built in 1913, designed by architects Zimmerman, Saxe, & McBride with a Burnham-esque classical buff terra cotta facade.  That facade survived into the 1950's, but when IBM took over the building, a new Miesian steel-and-glass curtain wall replaced it, designed by Shayman & Salk, a more suitable visual expression for one of the corporate powerhouses of mid-century modernism. 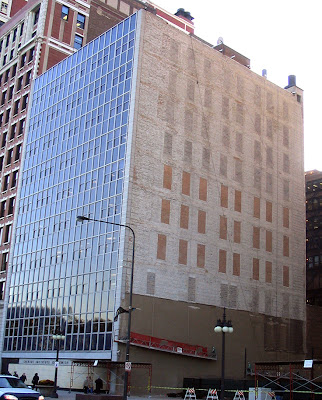 In 1974, the Spertus Institute took over the building, and added that monolithic entrance wall unbeloved by many.  In 2007, the Institute moved again, to a spectacular new building by Krueck & Sexton that has quickly become one of Chicago's architectural icons. Two years before the opening, the Spertus sold 76,000 square-foot 618 South for $8 million to Columbia College, which already owned both the Harvester and Blum's Vogue buildings.

For Columbia, which has a sterling record of purchasing, retrofitting and restoring vintage buildings throughout the South Loop,  Gensler has been engaged in an Urban Campus Repositioning "to rethink the way its 16 buildings fit into this burgeoning South Loop neighborhood."  But what of 618 South? Unlike most of Columbia's other structures, 618 South Michigan's original facade, long gone, couldn't be restored, only recreated, an inauthentic process.  So what is Gensler going to do?  First, they're going to replace the 1950's curtain wall with a new curtain wall, but on the glass they're going to etch a fritting that will evoke the terra cotta original.

That kind of applied imagery is very Venturi, and not unknown.  Cramer cites its use by Herzog & DeMeuron on their 1998 Fachhochschule Eberswalde library, where Thomas Ruff transferred images onto what became a photographic concrete facade.  Looking at the redesign of 618 South in this image from the invaluable skyscrapercity.com website, it's hard to make a judgement of how it'll work out. 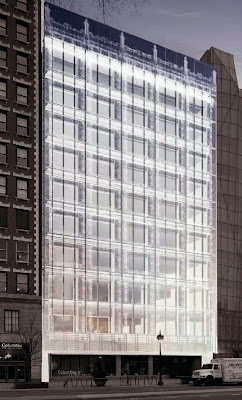 The fritting is described as "suggesting" the image of the original facade.  If it's too abstracted, will it be too insubstantial to register?  Still, the idea of this kind of layering, of intimating the past without denying the present, creating a tension of simultaneity, makes me look forward to seeing how it will all turn out.  And it doesn't -well, a future generation gets to take it apart and put it together still again - maybe they'll rename it "The Face Lift Building".

Your characterization of how the Children's Museum was not built in Bi-Cen Park is way off... Don't pat yourself on the back because the events that happened were a complete travesty! Really, economics was the main cause, not the NIMBY's.

Sorry, but it's your characterization of this as a NIMBY battle is what's a travesty, and typical of the kind of desperate slanders the proponents depended on. Every poll showed the opposition to building the museum in the park was overwhelming.

Keep in mind that this began before the 2008 financial crisis, and in that time the museum proved itself completely incapable of raising funds for the project. The widespread opposition made many think twice before giving to what otherwise would have been a natural outlet for philanthropy.

Where/when/how did you learn about plans for the 618 Building facade?

originally from the Grant Park Advisory meeting notice; then supplemental info from the Cramer blog post.

Gensler would be smart to collaborate with Bruce Mau or David Rockwell on the facade. It needs to be spectacular.

Thanks for the mention of my post on your blog, Lynn! The re-skinning of 618 S. Michigan is becoming somewhat of a tradition, it seems. I wonder what will be replacing the "ghost facade" in thirty years or so? JC

Interesting. I work at Columbia College and this is the first I've heard of this particular project or the fact that it is being reviewed at the upcoming Grant Park Advisory meeting.