Tonight, Friday, May 18th, Preservation Chicago will be holding it's spring fundraiser at the Mars Gallery, 1139 West Fulton.  The gallery, housed in a 19th century warehouse loft that was originally the home of the Empire Butter and Egg Company. specializes in contemporary pop art and outsider artwork.  The evening will feature the announcement of winners of Preservation Chicago's Photograph Chicago competition, including a $2,000 Best in Show as the top award.

The picture you see below, "Sears Tower, 3" by D. Harris, was among 15 finalists.  It depicts the interior of the long abandoned, original Sears Tower, by architect George C. Nimmons, on Homan Avenue on Chicago's west side. 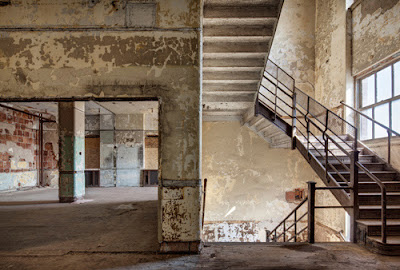