In a story published a couple years ago in the British tabloid The Daily Mail about the legal travails of Lord Peter Palumbo, reference was made to one of his global collection of homes, "a historic rural farmhouse near Chicago." 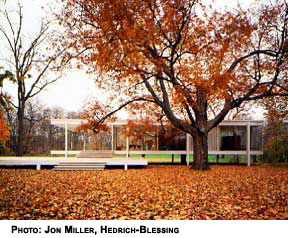 Far from the picture of a rock-walled rustic retreat that this reference might suggest, the domicile in question is, of course, Mies van der Rohe's Farnsworth House, one of the most iconic structures in the history of modern architecture, now available in Lego.

Completed in 1951, it's shrine-like qualities were derived not only by its unmistakable posture and the trespassing acolytes it drew, braving the hawk-like gaze of the house's owner tracking their every move through binoculars, but by its isolation, 55 miles southwest of Chicago, on a wooded, 60-acre site overlooking the Fox River.

The radical genius of Mie's glass house is its subversion of the homily of the house as castle.  These were no longer medieval times, or even the late nineteenth century, when the city's industrialists often secreted themselves in homes that looked like battlements, as security against their fears of violent reprisals from the working class. 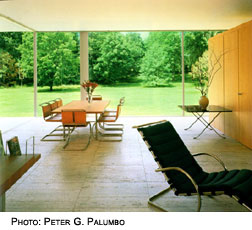 Now it was Eisenhower's America.  The brutal war had been won.  Labor had won its place at the bargaining table, and heated negotiations were now less likely to mean thugs and goons clashing in back alleys than lawyers in pinstripes facing off across a conference table.  It was gestation time for suburban sprawl, and Farnsworth House in Will County was at the country-estate cutting-edge of the great destabilizing waves to come.

“Here I am, Philip, am I indoors or am I out?” gibed Frank Lloyd Wright - whose own buildings tended to shut themselves up from the outside world - when confronted by another famous glass house, the home architect Phillip Johnson had designed for himself in New Canaan, Connecticut.  "Do I take my hat off or keep it on?”

Wright had begun to sour on Mies and his kind of modernism. But in this instance Mies was the one who got it right. “Before you live in a glass house you do not know how colorful nature is,” Mies said. “We should attempt to bring nature, houses, and human beings together in a higher unity.”  All those uninvited pilgrims never got the real story. You don't get the true experience of Farnsworth by looking in, but by looking out. This is the realization of an organic architecture  The border between the man-made and the works of nature dissolves to "almost nothing," and polar opposites reform as a single, flowing continuity.

Mies made no secret of thinking great architecture was the expression of the technology of its time, and so his architecture combined the lightness and strength of materials like steel and glass.  Yet, Mies was not only appreciative of nature, landscape was an integral part of his designs, working with masters such as Alfred Caldwell, for the design of the IIT campus.  Mies's drawings of trees are highly distinctive, to the point where Petra Blaisse incorporated them, full-size, in the 30-foot draperies she designed for Rem Koolhaas's IIT McCormick Tribune Student Center. 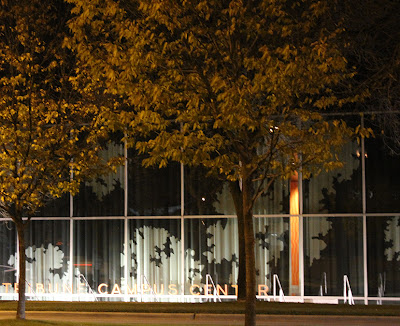 click images for larger view
At Farnsworth, Mies made sure there was a sweeping, sturdy Black Sugar Maple to shade the living spaces.  For over a half century, the great tree did its job well.  It endured, decade after decade, after Mies died in 1969; after Edith Farnsworth, who commissioned the house, died in 1978.  It saw the arrival of Lord Palumbo, and his departure.  Now its time, too, has come.   The long, low branch that reached down like a benediction to cover the house's great porch was lost a couple of years ago.  Just as, in his later years, Mies van der Rohe depended on crutches, the great tree, itself, is now held up by wires. 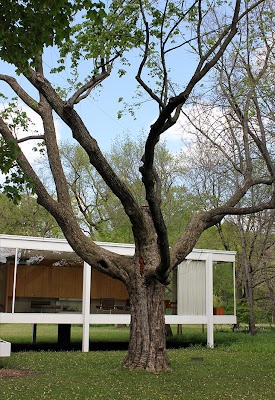 A great house is both backdrop and participant in the life stories of those who inhabit it.  The story of Farnsworth House is nothing short of an epic.  A tale of creation,  a love story, an affair gone sour, a bitter courtroom battle, floods of biblical proportions,  the threat of dismemberment, a dramatic auction, an unexpected twist, a last second triumph.  All the stuff of high melodrama - what more could a dramatist want?  We wrote our own version of the Farnsworth Saga (sounds like a Masterpiece Theatre series, doesn't it?) back in 2003.  Check it out here. 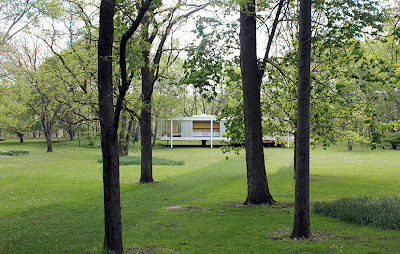 Farnsworth House is now a public museum, and is open April to November, Tuesday through Sunday - a perfect alternative for when city attractions are shut down for the NATO summit.  From May to October, the Chicago Architecture Foundation offers twice monthly all-day Farnsworth House excursions, buffet lunch included (but probably not cigars or martini's).