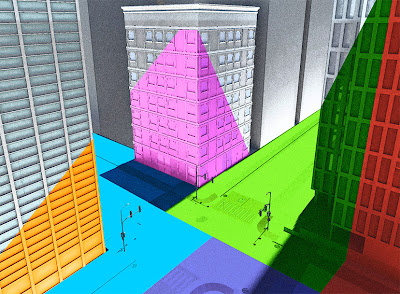 click images for larger view
If you're around the corner of State and Adams, anytime from 7:00 p.m. to 7:00 a.m. following, next Tuesday, May 29th through Monday morning June 4th, you can watch the creation of State Street's latest summer art blockbuster, Color Jam, by Chicago-based multi-media artist Jessica Stockholder,  complete with teams of workers and ten-story-high boom lifts.  Sponsored by the Chicago Loop Alliance, which also brought you Tony Tasset's EYE in 2010, Color Jam promises to be .  . .


. . .the largest public artwork in Chicago’s history and the largest contiguous vinyl project in the U.S. It is composed of over 76,000 square feet of colored vinyl—enough material to make 50,000 vinyl records, wrap over 130 city buses or cover one and a half football fields. Printing Color Jam on a standard HP home printer would require 2,100 ink cartridges and 180 hours of continuous printing. [editors note: the discovery that the vinyl, would not, in actual fact, be printed on a HP home printer led Hewlett Packard to announce on Wednesday that the company would be laying off 27,000 workers.]

However you measure it - and personally, I like to think of it as enough vinyl to pipe all our broken dreams to somewhere past Muncie - that's a lot of pieces, and if you're there towards the end of a shift during the set-up period,  I'd watch yourself lest you become the victim of a punch-weary volunteer, a la the wallpaper scene in A Day at the Races. 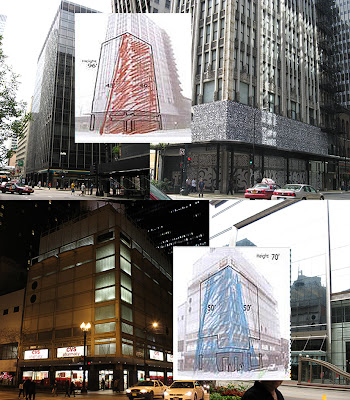 The buildings at the four corners of State and Adams represent nearly a century of Chicago architecture: the 2003 Citadel Center by DeStefano and Bofill, SOM's 1962 Home Federal, Holabird and Roche's 1915 Century Building, and Eckenhoff Saunders' Unicom Thermal Chilled Water Plant, from 1995.

Color Jam will saturate streets, sidewalks and building facades with a bold and resonant palette, creating a sensation of "walking through an animated film."

As people approach - on foot or in a vehicle - flashes of color will begin to reveal themselves: a stripe on the pavement, an unusual shape on a high floor of a skyscraper.  Closer to the corner, color will begin to intensify and overtake the field of vision.  Geometric shapes will form as they spill from buildings onto the sidewalk, overtaking traffic lanes, joyously "jamming" the street. And in the middle of the intersection - a vortex of color and shape will mark the Loop's latest destination.

You can download the brochure on the project here.  Already up and running on the Color Jam webpage is this streaming webcam overlooking the intersection, where you can watch the installation unfold.

This sounds completely crazy. Are they going to stop the traffic or what?
I hope you are going to post the result here on this blog. I can´t really imagine the way how it will look. Maybe something like Artscape Wychwood Barns which used some incredible techniques too.