Where the Bottom Drops out of Chicago: Wack Wack Wacker Drive 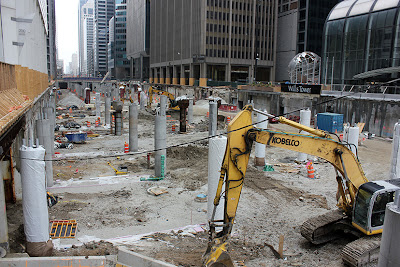 click images for larger view
Every couple of generations, Chicago reminds itself that it's a city on stilts.  Over a century and a half ago, Chicago decided to raise itself out of the swamp muck of its origins, six feet and more up and away from the mire and indifferent sanitation, and the disease that it engendered. 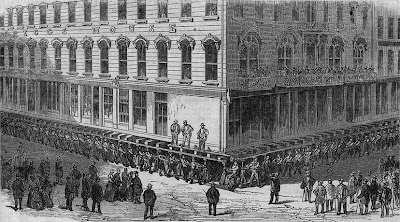 Phase II of rebuilding double-decker Wacker Drive has been going on for some time now.  The final leg - from Monroe to Van Buren - is scheduled to be completed by the end of the year.  It's called Revive Wacker Drive, an urban root canal that scraps out the decaying pulp and rebuilds the canal that supports the traffic. 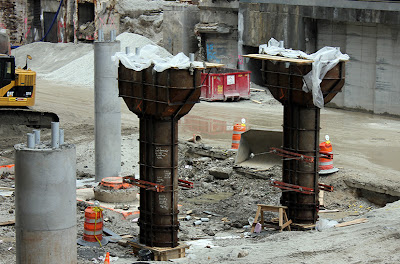 We've been through it all before, in the 1950's, as you can see in this photograph from the Chuckman archive. 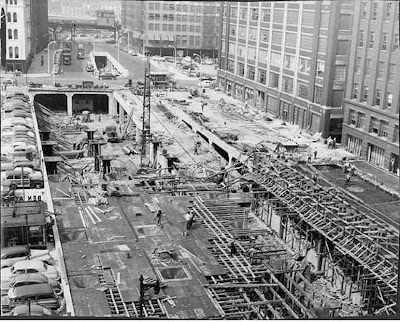 Then, as now, the process is a surreal reveal of the real underpinnings of the city's great buildings, a pulling back of the veil of the man behind the curtain.  For the brief period of construction, you can see a tower like the Civic Opera is not really anchored by a colonnade of massive columns at sidewalk level, but by a grid of fireproofed steel columns beneath that, in comparison, seem little more than a succession of thick pins.