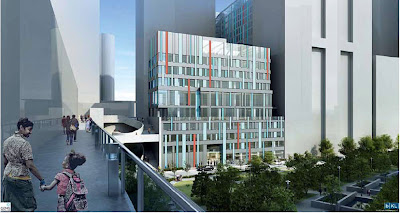 Ten years ago, this is what the press release said:


OWP&P has been retained by the Chicago Board of Education and has generated preliminary designs for the Lakeshore East Elementary School, the first elementary school in Chicago's central business district.  The design for the structure, which will include a community center administrated by the Chicago Park District, plays off the geometry of the park and includes a masonry exterior and a green roof.

Now, Lakeshore East is finally getting that school, but its not public.  Despite the fact that nearest public high school is Wells Academy, three miles away, the Lakeshore East project has become the Chicago flagship for the supply-chaining of education, and the first American outpost for GEMS World Academy.  GEMS was founded in Dubai in 1959, and has become operator of a large number of schools in that country and throughout the United Arab Emirates.  The for-profit company, which claims over 100,000 students in 125 countries, is going on a tear,  expanding to countries all around the world. 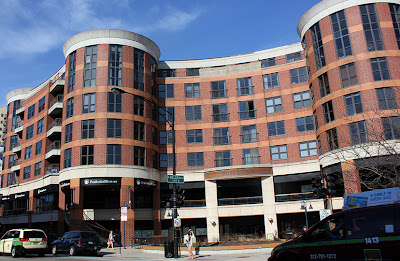 GEMS enters Chicago this fall with the preschool  "Little GEMS International", for children 6 weeks to 5 years, the first to open in the U.S.   It's in the building at Belden and Clark best known for its time as the home to a Tower Records superstore.

GEMS education places an emphasis on global citizenship, with a Core Values listing including:
The company's growth has not been without controversy.

At a time when the Dubai Knowledge and Human Development Authority imposed a freeze on school fees, GEMS managed to get the government to allow it to increase its fees by 30% over three years.  In the KHDA ratings of the countries schools, the lowest-rated GEMS school came in as "Acceptable",  three more as "Good".  Both the second and third-ranking schools were GEMS operated facilities, both moving up from "Good" ratings in 2008-2009 to "Outstanding" for 2010-2011.

"The ideal circumstance, and we look forward to this in GEMs, is that you have an excess of supply," David Wilson, director of Gems Education's Asian schools has declared in an interview. One teacher at a Gems Indian Schools said the challenge was not finding good teachers, but having them agree to low salaries.A teacher advocates website reported that the increase in fees amount to 152,000 dh per month, while the increase in teacher's salary expense was 80,000 per month.

"Our chairman Sunny Varkey doesn't care about profit," Raminder Vig, director of schools at GEMS UK told Education Investor.  "He actually gives money away." GEMS has 10 schools in UK, with plans to open six more over the next 2 years.  Vig says the group has yet to make a profit in the UK.

"Margins are not the same as private schools, so you need a strong philanthropic base, and GEMs has that because our founder has pledged to educate one child free for every 10 we make money from,  Zenna Atkins told the Financial Times Jane Bird in 2010.

One commentator claims "for-profit international schools will be the way of the future."  How many years away are we from having our schools controlled by global corporate conglomerates?  GEMS is the Nordstrom's beachhead.  Can the Walmarting of American education be far behind?

No price tag has been published for the new construction at Lakeshore East, but there's no doubt that it's not being done on the cheap, with not one, but two buildings designed by  bKl architecture, the successor firm to Brininstool and Lynch, with former SOM executive Tom Kerwin.

The first building, fast-tracked for a 2013 opening, will serve students from Kindergarten to 4th grade, will be a 9 story structure just west of the Tides.  It rises nine stories - 153 feet - from a 10,000 square-foot site, with a total of 82,000 square feet of classrooms and facilities.  The entrance is on the lower level of the Lakeshore East Park, along Water Street.  The green roof features a play area. 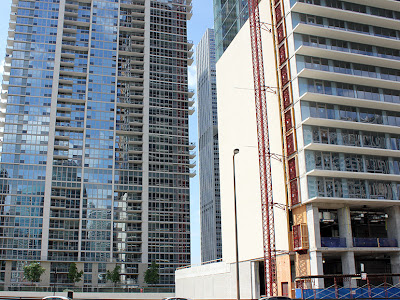 The real gold plate comes with the second building, to be completed sometime in 2014 on East Wacker Drive, sandwiched between the under-construction 430 foot-high Coast apartment tower, also designed by bKl,  and another residential high-rise to be named later on the now vacant lot to the east.  This school will serve students from grades 5 through 12.  The site is 24,000 square-feet. 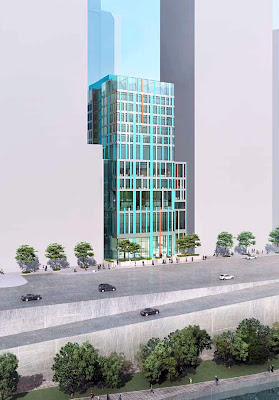 The building rises 13 stories above Wacker.  Although the Lakefront Ordinance document specifies "no basement", the structure actually has multiple floors below Upper Wacker, including 2 levels of public parking, and a spacious"Student Arrival Lobby" on Lower Level 4, with a bus drop off on "sub Wacker Drive."  The expansiveness of the curriculum is inferred by the spaces of the building, which include a large swimming pool (with a viewing deck at the Upper Wacker entrance level), an equally large auditorium, complete with Scene and Stage shops, and a 235 square-foot changing room.  There are separate rooms for instrumental and choral music, a "3D Art Classroom", a room for "Digital Art", a "Black Box" space, and a 3,000 square-foot roof play area on Level 14. 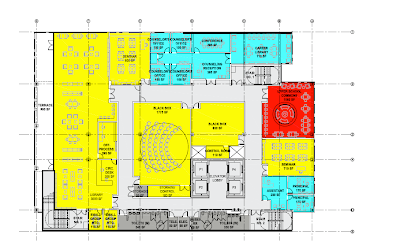 The curtain wall facades feature vertical elements of different widths in three different colors.  It will be interesting to see how these play out.  The color scheme evokes not entirely comfortable memories of the Thompson Center palette.  On the Phase I building, none of the verticals extend the full height of building, which probably serves to de-emphasize the height, but it's hard to tell from just one rendering just how well it will all work out.  The Phase II building is more direct about its verticality.  Like the Phase I structure, it features one setback.  As with the new Lurie Hospital, the playful facade resists resolving into the traditional rectangular glass box tower.

On July 25th, 42nd ward alderman Brendan Reilly will be hosting a community on the project, 5:30 P.M., at the Radisson Blu Aqua Chicago Hotel, 221 N. Columbus.