I Am Curious, Morbid (but only through Sunday) - an unnerving show finds the perfect architectural setting

O Rose thou art sick.
The invisible worm,
That flies in the night
In the howling storm:

Has found out thy bed
Of crimson joy:
And his dark secret love
Does thy life destroy.

Has there ever been a better match between an exhibition and a space than Morbid Curiosity, The Richard Harris Collection, which closes out its long run at the Chicago Cultural Center this Sunday, July 8th?  I'm not talking about The War Room, the harrowing collection of art on the atrocities of war across five centuries from artists Jacques Callot, Francisco Goya, Otto Dix, the Chapman brother and Sandow Birk, mounted in the usual white-walled gallery space.

No, we're talking about The Kuntstkammer of Death, "a cabinet of curiosities . . . in which the wealthy and powerful maintained rooms filled art and artifacts, scientific specimens, and exotic objects,"  housed in the half-block long Sydney R. Gates Gallery, an overripe 19th century evocation of Pompeii and the Renaissance, with more than a touch of Tiffany.
Morbid Curiosity, curated by Lucas Cowen and Debra Purden, consists of a massive collection of death-related art and objects, ranging across several aeons, from a 1200 B.C. Mexican Skull Mask, through old masters like Durer, newer masters like James Ensor, to the latest work of contemporary  sculptors.

You can find a wealth of photographs on both the Morbid Curiosity: Richard Harris Art Collection site, and on the Public Art in Chicago blog by Jyoti Svristava, who has been kind enough to allow us to share some of her eloquent photographs on this post.  These two resources provide an exhaustive documentation of the show, but it's no substitute to seeing it in the physical context of its Cultural Center setting.  Make no mistake:  you will never see anything like this exhibition, and you owe it to yourself to make it to the Cultural Center before the show closes this coming Sunday, the 8th.  (Closed July 4.) 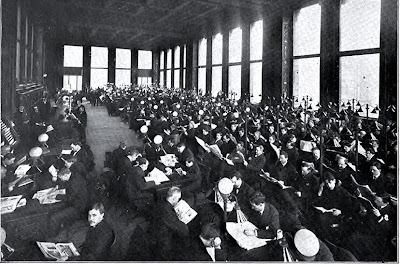 The Yates gallery is what was originally the Reading Room of Shepley, Rutan and Coolidge's 1897 Chicago Public Library.  At the time of its opening, a Harper's Weekly critic found "delightful relief" in how the classical style of the library confounded their accustomed thinking of Chicago architecture as "a rather crude embodiment of brute force."


It is interesting to note that the position of the reading and reference rooms is in the same as that proposed for the New York Public Library, viz., on the top floor of the building.

The reading room is the most imposing feature of the interior.  It occupies the entire northern front of the building, and is lighted on all sides by windows seven feet wide and twenty-three feet high.  The dimensions of the room are one hundred and forty feet by fifty-five, and thirty-three feet high.  The immense ceiling is carried upon heavy steel trusses.  There are seats for three hundred and forty readers, and room at the newspaper stands for seventy-five more. . . . The color scheme [is]  sumptuous.  The wainscot is of verd-antique, the walls are dark red, and the three members of the entablature - the architrave, frieze and cornice - are treated in color so as to form intermediate steps of yellow, green, and blue between the walls and the ceiling.  The higher parts of the relief ornament upon the pilasters, cornice, and coffers are emphasized with metal --gold of an antique finish against a background of transparent colors.

Another critic was more ambivalent . . .


The color scheme is bronze and green, which in its general effect is very good.  In detail, the colors are crude, metallic and even disagreeable  . . .

If you take in the exhibition in these, its closing days, even if the blinds are drawn, light lurking behind those continuous strips of 30-foot-high windows and poking around the edges emphasis the openness of the spare steel structure beneath the classicist veneer.  The natural light dissolves the dark mystery communing the space with the macabre objects inhabiting it.
I'll never forget seeing the show at its opening, on a typically dark January late afternoon, when the only light in the room was artificial.  Those huge openings became opaque, dark windows into the abyss.  The spindly, biliously-hued pilasters between them climbed to the coffers of the ceiling like the fleshy legs of a giant spider, into whose lavishly decorated web we found ourselves willing prisoners, enthralled within a liebestod contemplation of our own inevitable extinction.
Skulls, skeletons and bones, the remnant artifacts of our expired bodies, re-animated through the imagination of artists - most, themselves, long reduced to dust - conspired in an infinite variety of grotesque variation with the obsessive, gaudy ornament of the room to invoke a claustrophobic ether of corruption and decay.
Yet even in these long days of generous sunshine, Morbid Curiosity is a compelling experience, not to be missed.  For your visit, I wish you a day darkened by storm clouds, and a gallery enveloped by the blackness of night.