The Death of Variety? The Supply-Chaining of the Magic of the Movies

Nostalgia Alert!  If you insist on living in the present, turn back now.  (And it's not nostalgia: it's cultural history, dammit.) 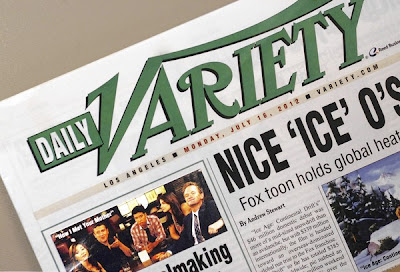 One of the happiest moments in my early adolescence was walking one day into the old St. Louis pharmacy on Lawrence Avenue near my Albany Park home and finding, on the bottom shelf of the magazine rack, a copy of Variety, a/k/a "The Show Biz Bible".  I was already in love in movies and with the architecture of the Chicago's movie palaces, which offered a Cooks Tour, if slightly inauthentic, of many basic historical styles, from the French Baroque of the Chicago Theatre, to the Eastern Hallucinogenic of the Oriental, to the Ocean-Liner Deco of the Esquire.

I stood, mesmerized, drinking a Coke (dispensed in a bottle from their Coke machine), reading my first copy of Variety, as I discovered its comprehensive weekly portrait of what was going on with those theaters, each of which had its own personality and booking policy.  At a time when new releases still opened at a single, downtown theater, the Chicago was the prestige flagship at which the biggest, most prestigious films opened.

Unless they were roadshows, a category that came into its prime in the 1950's as Hollywood as a weapon against television.  Roadshow houses, like the Michael Todd, Cinestage, McVicker's and Palace, scheduled films like they were stage plays, as if a movie's cast and crew somehow had a limited stamina for only so many shows a week.  Other than holiday periods, there were generally only ten performances a week, one each evening, plus matinees on Saturday, Sunday and Wednesdays.  Among many other titles most of which are now mercifully forgotten, roadshow attractions, usually filmed in the much more detailed 70mm format, included such films as Ben-Hur, Lawrence of Arabia, Spartacus, My Fair Lady, and Ryan's Daughter.  The Sound of Music marked the zenith of the roadshow, dethroning Gone With the Wind as the biggest grossing film of all time, and its run in most U.S. cities was measured not in weeks, but  years.
Every week, Variety published the gross receipts for every first run theater, not just in Chicago, but in major cities across the United States and Canada.  Just as in Chicago, each theater in each city had its own unique personality, and, often, a distinctive name to go with it.  There was the Gopher in Minneapolis, the Grand Circus in Detroit, the Boyd in Philadelphia, the Forum 47th, Astor, Victoria and Criterion in New York, plus Orpheums, Paramounts, States and Stanleys sprinkled liberally all across the country. 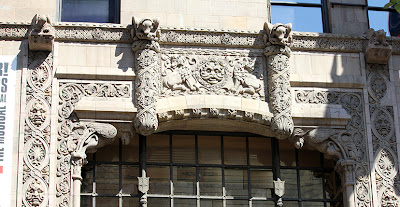 I was such a nerd as a kid that I amused myself by creating my own estimate of the rental income for every major release by adding up the week-by-week figures for each theater covered in Variety, and also tracking every second run theater in Chicago, using the aggregate second-run grosses for cities like New York also reported in Variety, and then extrapolating the results for a national estimate.  I would always be eager to get my hands on Variety's year-end issue, which included the rental grosses for every film released that year to compare, and my own estimates were usually pretty close to the actuals.  (Except for films that did especially well in the South, or in smaller houses and drive-ins, which Variety covered only fitfully.)  Yeah, I know, it's pathetic, but it was a lot of fun at the time. 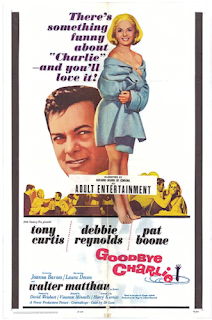 In December of 1964, during the prime Christmas Holiday booking season, Goodbye Charlie, a film directed by Vincente Minnelli and starting Tony Curtis and Debbie Reynolds, both big stars at the time, and Walter Matthau, soon to become one, opened, not in one of the big Loop movie palaces, but in a wide "Showcase" release to theaters throughout Chicago.  No one noticed it at the time, but Goodbye Charlie could also have been named Goodbye Movie Palace.  Already, urban population was spilling out in great torrents into the emerging suburban sprawl.  Movie theaters followed - every shopping mall with any claim to importance had at least one.  1972's The Godfather was the last major Hollywood release that opened in exclusive run at downtown theaters.

The "Showcase" release became the only release.  The downtown movie palaces lost their central place.  More of their bookings began to target what exhibitors thought inner-city minority populations wanted to see: action films or what came to be known as Blaxploitation films.  Soon the best week's gross at a Chicago movie palace was what would been considered disastrous only a decade or so before.  The economics stopped working.  Theaters crumbled, closed, and, in too many cases, were demolished.  The Chicago Theater just missed being destroyed for an undistinguished Skidmore, Owings, Merrill office tower.

Variety stopped publishing theater by theater grosses.  Motion pictures became relentlessly Supply-Chained.  The idea of a 10-show-a-week multi-year roadshow run, exclusive to a single theater, now seems insane.  You book your film in as many theaters as you can get away with, especially for the big blockbusters.   The Dark Night Rises is on 4,400 screens this weekend.  At most multiplexes, you can choose from screenings scheduled every half hour. 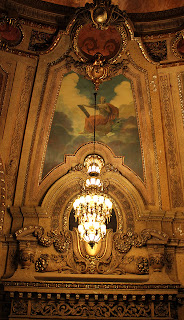 Make no mistake.  Movies have always been a big business.  The major studios that flourished in the 1920's, 30's, 40's and beyond weren't called "Dream Factories" for nothing, and they kept their key assets - the movie stars - under contracts so tight they'd bring a smile to the face of Rupert Murdoch.  And they were vertically integrated, both making the movies and owning the theaters to show them in.  Yet their business model was predicated on creating a sense of the special, from the fairy tale architecture of the palaces they built to lure in the customers, week after week, no matter what was showing on the screen, to the roadshow release that combined high-tech (wide screens, higher resolution, stereo sound) with the manufactured scarcity of limited showings.

Today, while we're seeing a resurgence of distinctive design to make a given multiplex more competitive, it's still pretty much all about supply chained, least-common-denominator efficiency.  You take the risk out of exhibition by not having to choose which movies you book.  You cram enough auditoriums into your multiplex so you can offer the public every major release on any given weekend.  When designed and managed competently, each auditorium will offer a high degree of comfort and technical competence, but, other than size, each auditorium will be essentially identical.  You no longer buy a ticket for the Orpheum, Fox or Pantages, but for Theatre 16, 2 or 34.

And so reporting success and failure in movies is no longer for insiders and their wannabees, but a promotional spectator sport, the weekend's grosses a hit parade boxscore promoted through every news and media outlet in the world.  Who won?  Who lost?  It's a lot more efficient, but the commodization has killed a lot of the magic - just as it's killing Variety

You should read the blog Greenbriar Picture Show; he loves digging into exhibitor reports and trades to describe how the business really worked on this or that picture or star.

And have you been following the news with the Portage and the Patio? Both had good news for a change for old theaters this week...