Would you walk a mile for a Camel? Art Deco facade newly uncovered, quickly replaced. 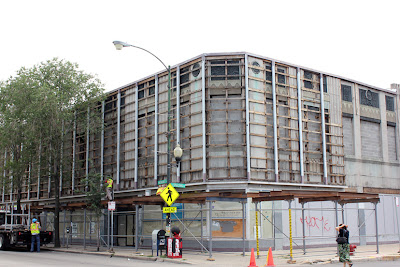 click images for larger view
We recently came across a great post on the Chiboulevards blog and we had to check it out for ourselves. 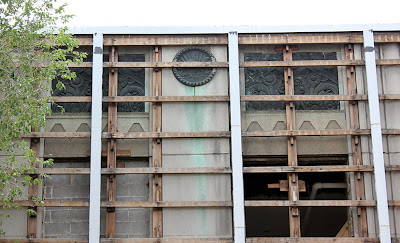 For years, the Logan Square building at the corner of the Milwaukee and Spaulding was characterized by a crude corrugated metal facade, which you can see in the photo by Eric Allix Rogers here.  Then last fall, that facade was removed to reveal, beneath the superimposed metal framing, the battered but still handsome Art Deco facade of original structure, designed by architects Leichenko and Esser, which can be seen here.  The building was completed in 1931, on a former used car lot next to 1925 3,000 seat Harding Theatre, one of the lesser remembered of Chicago's great movie palaces, which was demolished less than four decades later, in 1963. 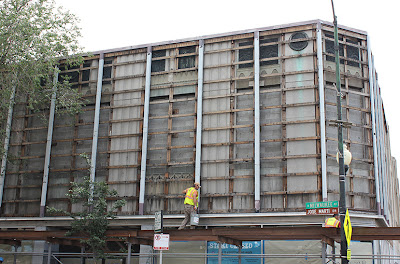 The 1931 building was commissioned by Sol Goldberg, inventor of the modern bobby pin, who in  1915 had torn down the Samuel Allerton mansion on Prairie Avenue, and commissioned Alfred Alshuler to design what would be the first factory on what had once been Chicago's millionaire row.  In 1930, Goldberg's Hump Hair Pin Company also commissioned Leichenko and Esser to design the flatiron tower at Diversey and Milwaukee that has been recently been restored as the Hairpin Lofts, also remembered as the former Morris B Sachs store. 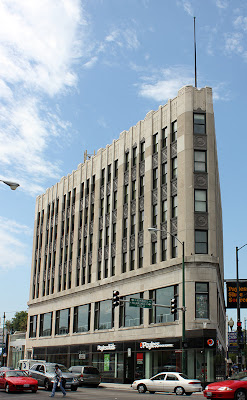 The same camel spandrel ornament you'll find at the Lofts . . . 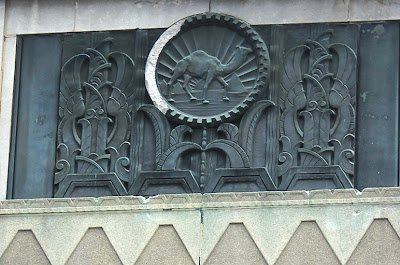 The selling point of Goldberg's bobby pin was that it was the "hair pin with the hump."  Hence the affinity for the humped camel as a kind of corporate mascot, with a promotional good luck token promising "Prosperity.  Health. Happiness", as well as the diecut tin sign seen below. 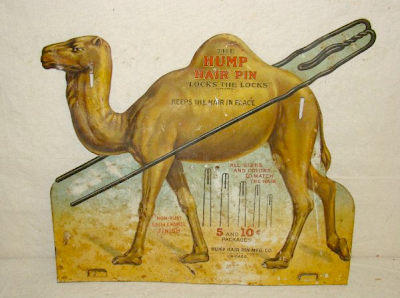 After a long discussion, Logan Square Preservation reluctantly conceded that nothing could really be done to save the original limestone facade, which would be very expensive to restore, so now we're getting this: 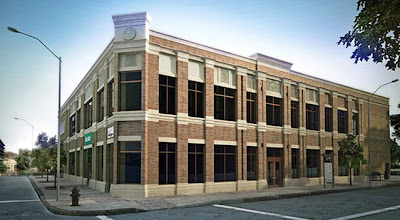 Notice that the decorative panels are shown to be incorporated into the new brick facade for what is called the 2700 Apartments, which is as achingly generic as the original was playfully distinctive.  If you're in the neighborhood, walk by to check it out one last time.  It won't be there much longer. 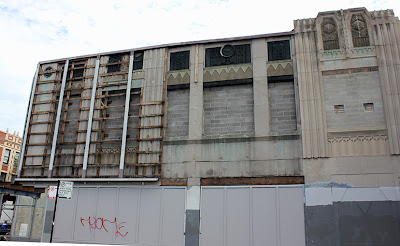 I am sick at the thought of losing that great facade, but as a practicing architect I know that sometimes the money and/or client will to do the right thing is not there. What really makes this a crime is that with all the great examples we have in this city of how to build with brick and stone, apparently nobody is paying attention.
The design of the new skin is lazy and rote. It might as well be on a bank in bolingbrook. We can do better, and have, but the people doing the design have to know what doing better means.

I have been by this building several times and had the impression that the old facade was in pretty good shape. This is really a shame. Why does our society reward blandness and mediocrity to often?

It might as well be on a bank in bolingbrook.
Kitchen Countertops Long Island

good work, it is really very difficult to make it.