[Update: September 7, 2014]
The Gray Ghost continues to haunt the intersection, perhaps hoping to hang on at least until Halloween.

[Update: January 17, 2014]
The Chicago Architecture Blog reports that the Chicago Plan Commission has approved the new development. Fifield is out; Urban Form Investments is in.
We've all seen living statues, the street performers who transform themselves into stone by covering the natural color of their skin with a grayish patina.  A living thing masquerading as a dead replica. 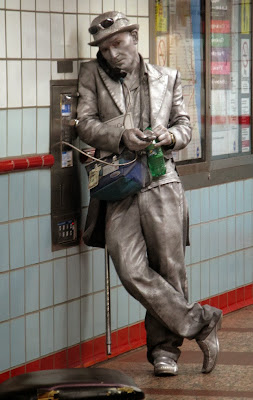 At Grand, Milwaukee and Halsted, at least for a while, you can see an architectural equivalent of a living statue, an entire block of once vital buildings gone stone gray cold.

There appear to be seven different structures in the group, from a single story garage to three-story loft - different styles, different sizes, but one thing in common.  They're all dead.  They've been dead and abandoned as long as anyone can remember.  Their brick and stone has been smeared over with a uniform, living-statue-like gray paint.  Along the ground floor, there's a continuous splash of dirty brown evocative of excrement or - if you cling to the metaphor - a failed bronze base.

A recent post on the Chicago Architecture Blog says it used to be a restaurant supply house that suffered a fire sometime back.  The blog author says “somehow it still managed to funk up the neighborhood year after year.”  Which was somewhat more acceptable when the the neighborhood, itself, was pretty funky, a long way from its once solid working-class status.  You can see what it looked like then in this photo.  The buildings on Milwaukee are one of the few surviving components.  The corner building's triangular cuppola is visible in the upper left corner.  Today only the base remains. 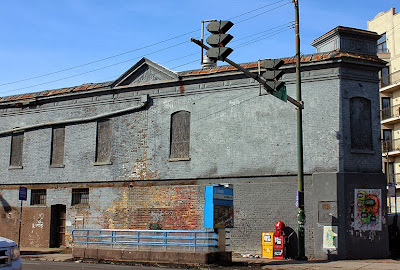 Only a few years ago, the funkiness was literal, attested to by the mural across the street . . . 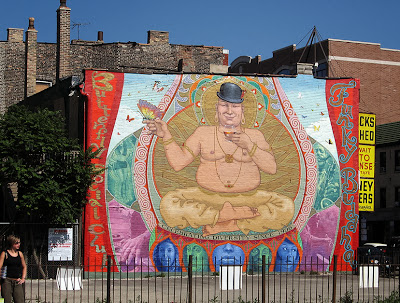 Now, however,  everything's coming up gentrified.   The currency exchange is gone, and the parking lot in front of the mural has become the home of a new building for The Dawson. 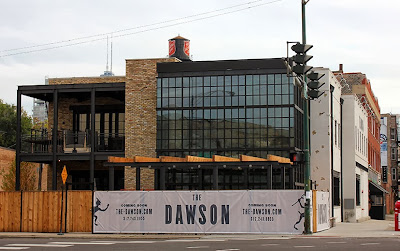 “Designed to look like a Nineteenth century men's hangout with modern twists”, it's named after the 19th century manufacturers whose five-story loft building is just up the street . . . 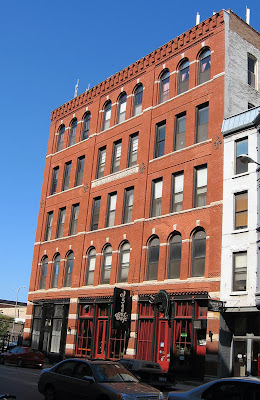 Now Fifield is floating a proposal to replace the grayed-out buildings with a new five-story retail and residential structure by Pappageorge/Haymes.    Renderings here.

The vanishing takes place right before your eyes.   Even as the gray erases their individual character, the buildings continue to decay and die beneath the veneer.  For all intents and purposes, they've already disappeared.  Not a smile, but a scowl, is all that's been left behind.  In an instant it, too, will be gone.  You won't even remember they were there. 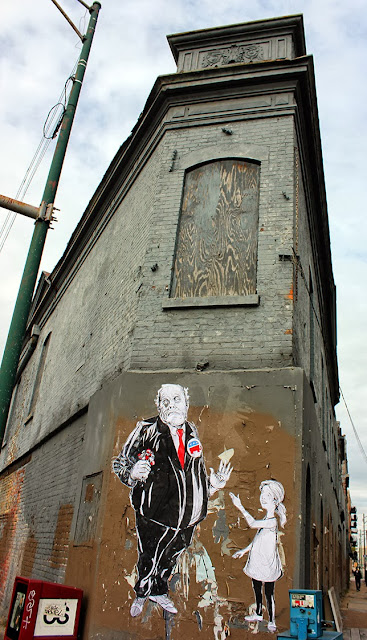 egads! i will remember it.
too bad the rendering is more mediocre disproportionate design. that is such an energetic crossing. sigh.