As we continue to work on the November calendar, and just in general take a breather (including taking in Noah Haidle's Smokefall, with the great Mike Nussbaum, at the Goodman Thursday night - closing Sunday), we turn to our indefatigable correspondent Bob Johnson to bring you this update, which begins at the Chicago Architecture Foundation, where its striking model of Chicago . . .
. . . now well into its fifth year, has seen even its tallest tower eclipsed by twin walls of water . . .
. . .  that form the backdrop for CAF's new exhibition, Great Lakes, Great Cities, Great Basin: Bold Ideas for the Great Basin Park . . .


You know your neighborhood, but do you know your basin? Through this exhibition, the urban designers at Skidmore, Owings & Merrill LLP issue a call to arms for all of us to think about our water, our boundaries and our identity. The Great Cities, Great Lakes, Great Basin exhibition depicts the Great Basin as one region defined by the watershed rather than political boundaries. Visit this exhibition and learn the impact you make not only in your immediate neighborhood or city, but in the basin in which you live.

Now open daily, 9:30 a.m. to 6:00 p.m.
Meanwhile, Bob provides us this aerial shot of the progress at the $55 million Maggie Daley Park, which the Sun-Times' Tina Sfondeles reported  this week has reached the halfway mark towards a soft opening next fall, and a final completion in 2015.  Viewer drivable webcams here. 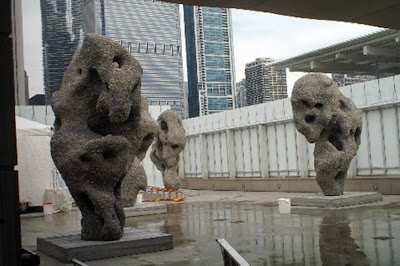 And that crane you see in the picture hovering over the Modern Wing of the Art Institute?  That was for the installation of the latest installation at the sculpture garden, Ugo Rondinone's we run through a desert on burning feet, all of us are glowing our faces look twisted, which runs through April 20 of next year, by which time the Picasso's and Matisse's should be back from Ft. Worth and the now closed Modern Wing third floor re-opened..

Now, back to the calendar.  Or maybe just a nap.