Thursday morning was the big keynote of the American Institute of Architects 2014 convention in Chicago, featuring introductions, awards, a benediction by Mayor Rahm Emanuel, and talks by Theaster Gates and Jeanne Gang.  We'll proably be writing more about what they had to say later, but for now here's what it looked like on the scene . . . 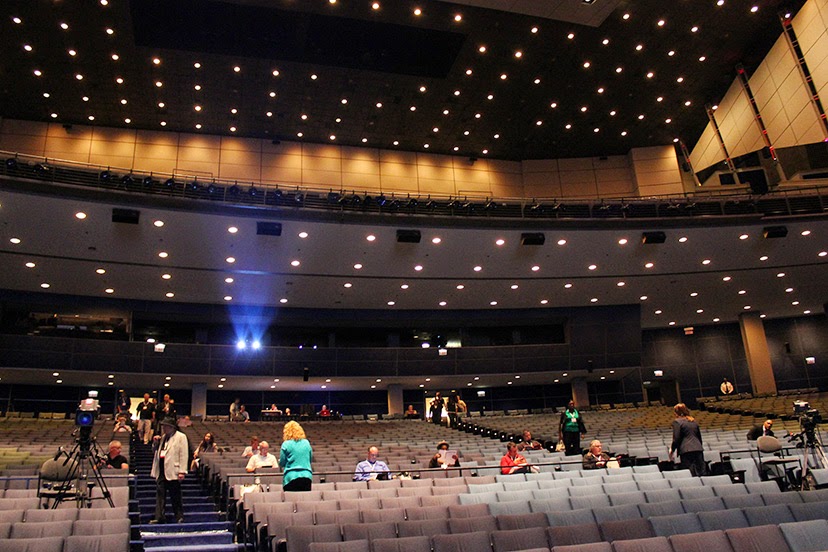 Arie Crown Theater, the cavernous barn of an auditorium that didn't have the decency to burn down with the rest of the original McCormick Place back in 1967; 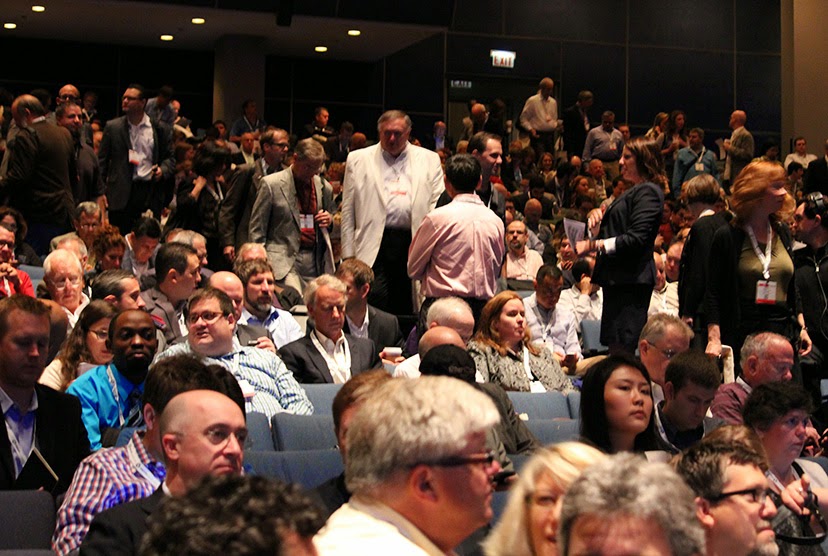 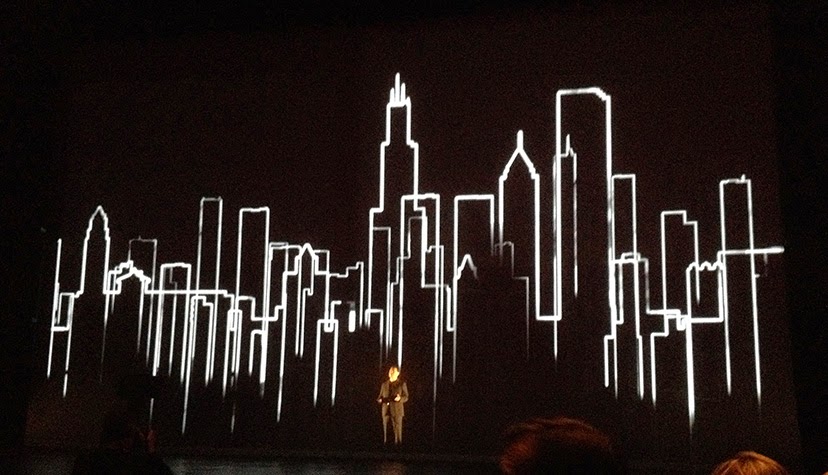 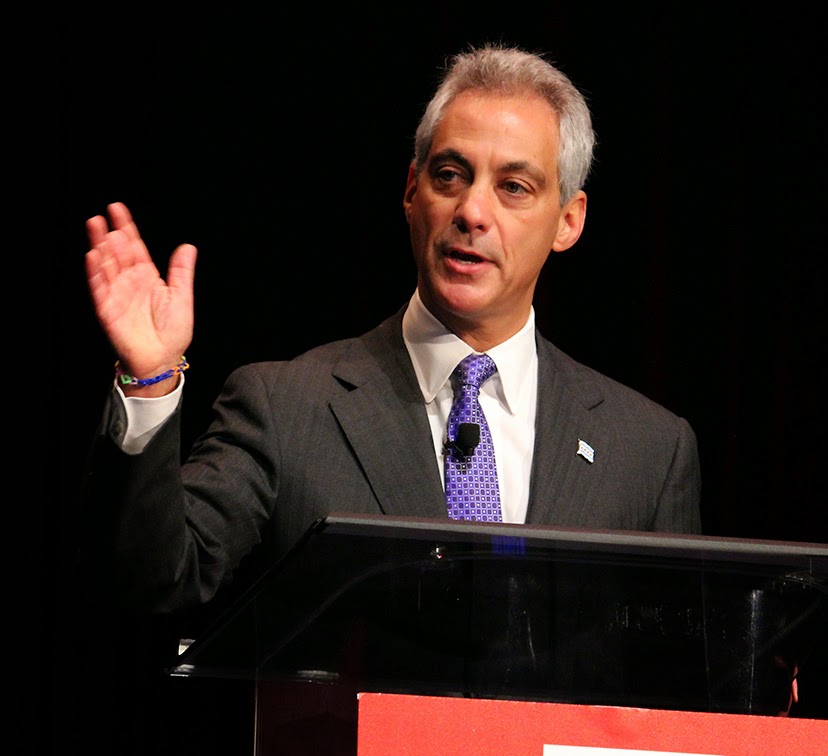 Rahm talked about Chicago's architectural heritage as “the home of modern architecture”, and the newly announced Chicago Architecture Biennial, to take place in October 2015.  “It will be the largest convention of architects and designers and people thinking about the future of architecture in cities in all of North America”

The Mayor was wearing a colorful handmade “Peace” wristband sold for $1.00 by a six-year boy at a North Side Wal-Mart. Sun-Times columnist Michael Sneed reported that Emanuel “urged the boy to charge his bodyguard $2 for a bracelet.”  Which may go a long way to explaining why those CTA stations are costing so much.  Or am I reading too much into this? 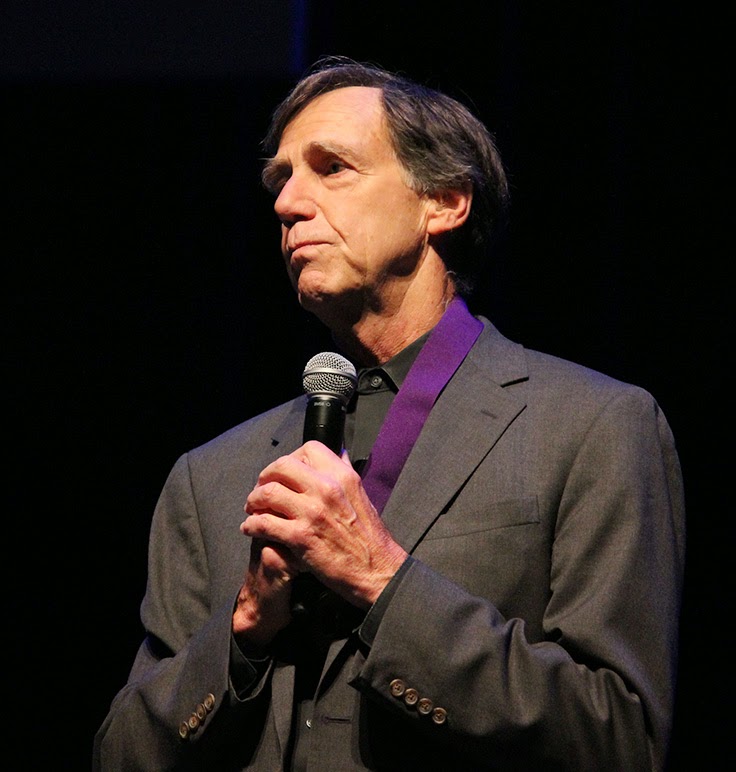 The AIA's 2014 Topaz Medallion for Excellence in Architectural Education was awarded to Harrison Fraker, who founded what is now the Princeton Environmental Institute and is a pioneer who “pushed the academic study of energy use in buildings to the forefront of the sustainability movement.” 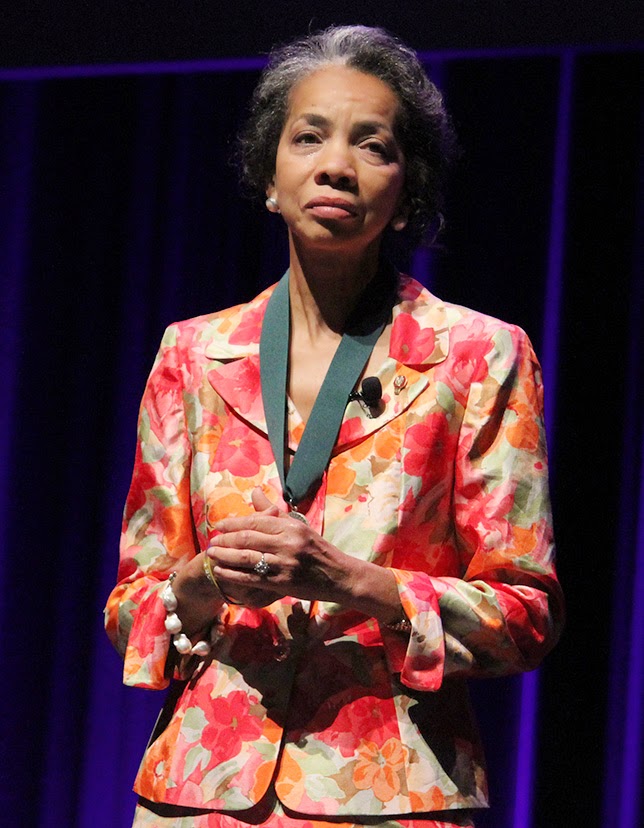 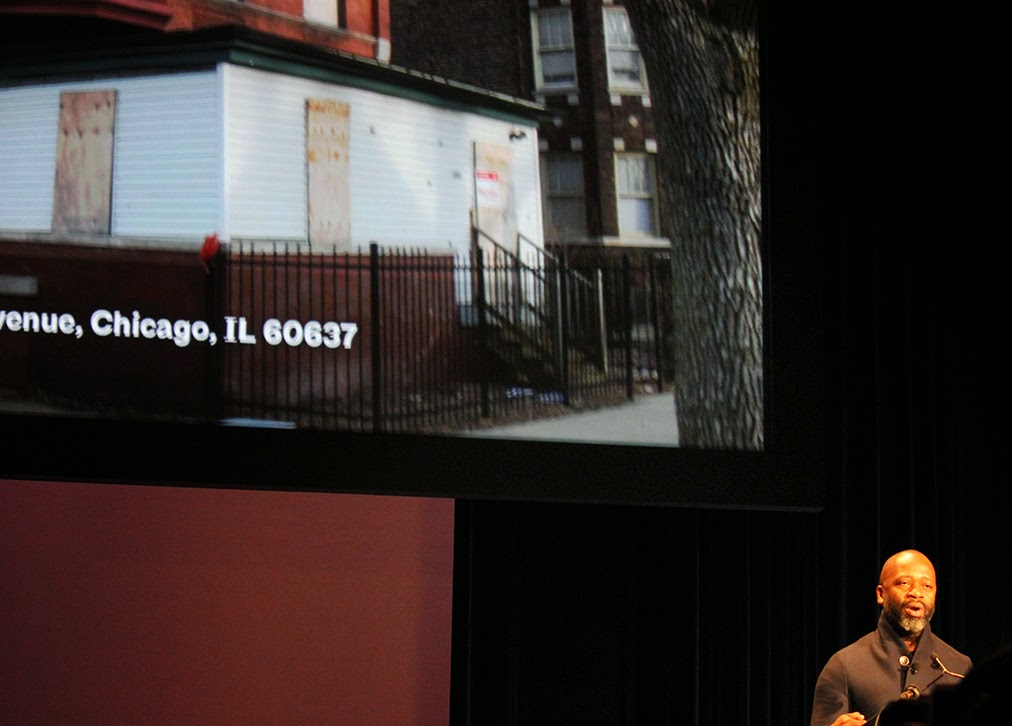 “I asked myself this morning,” said artist and activist Theaster Gates, ”what does it mean to talk to the field of architecture as an artist? What does it mean to have this captive audience to think with me about how our cities look and feel?”

In his keynote Gates answered with a overview of two recent projects - 12 Ballads for Huguenot House and the Stony Island Arts Bank, but only after saying ” I really want us to forget about those buildings and imagine that we're talking about process, that I'm talking about the capacity for the field of architecture and the field of design and the arts to re-imagine how cities function and to re-imagine the agency that we have as design professionals to change the world.” 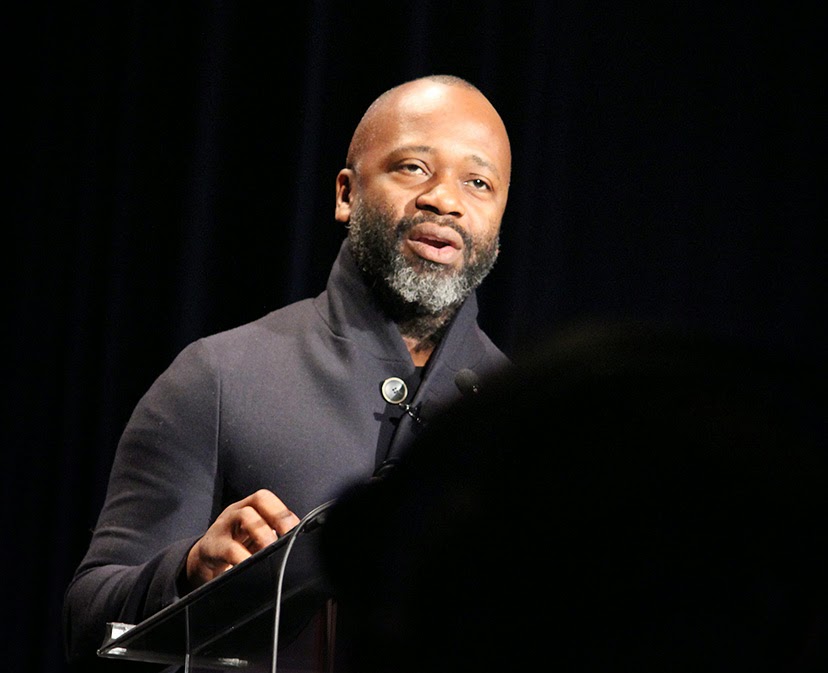 Gates talked about neighborhoods like those on Chicago's South Side “People forget about them.  [Their architecture] at one time may have been ambitious, the people who live there [now] may have real lives and real ambition.  There's just no reason to talk about it, because it seems like nothing's happening there .  The building that we're looking at is at 69th and Dorchester .  It's one of those buildings.  In my artistic practice, a big part of it is about re-imagining how spaces are activated.  Sometimes I take abandoned buildings.  I perform in them.  I sweep them.  I mop them.  I rehab them.  I do things like an architect . . . like an architect.” 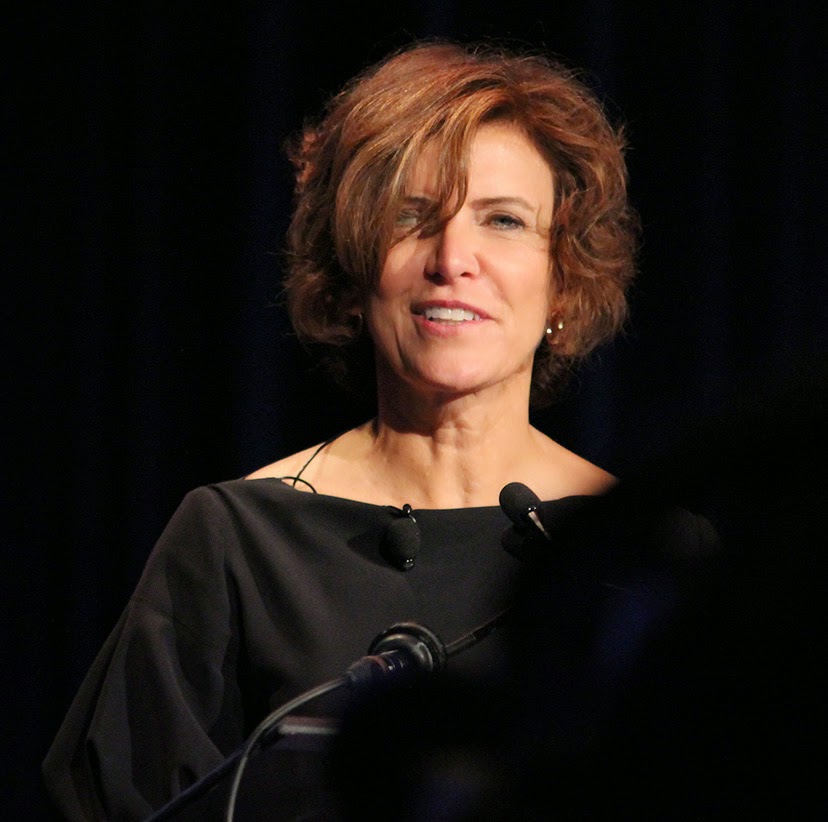 “I am calling this talk ‘Purpose is Process’, said the mornings second keynoter, Studio Gang's Jeanne Gang.  ”Now when I first heard about the title I wondered, how do you get purpose?  Do you just wake up one morning and find ouy you have a purpose?  It's really not like that.  It shouldn't be a marketing slogan and it shouldn't be something you have to concoct .  It really is something you develop over time. It's a process.  Maybe another way to put it is:  Does architecture correct social change, or    . . . is it social change that determines architectural space? 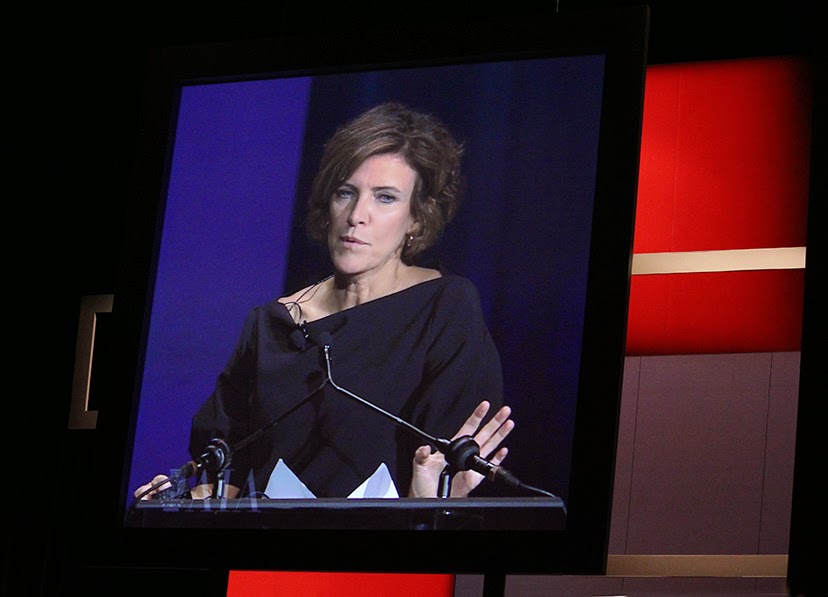 This launched into Gang providing a history of Northerly Island, including a visual demonstration of how much of the site and its environs were not a green space, but an almost interrupted sea of concrete.  She contrasted that with her design for the Northerly Island Framework Plan for returning it to the public as a 90-acre recreational space, a process that is rapidly nearing completion.

To underscore how Studio/Gang's practice is based on process and research, Gang concluding by discussing her latest project, creating BLUEprint, a strategic plan for the National Aquarium in Baltimore, which has resulted in Gang learning more about the oceans than most of us could ever hope to know.

“As architects you never really think that you can begin a project that has to do with the ocean, but in fact I think our skill sets are really attuned to this. . . . The way that we used to perceive the ocean back in Greek times it was one ocean, not multiple seas.  And now today it is a contested space.  It's very heavily harvested for all kinds of different resources and materials.  Only 2% of the whole ocean is protected, which is very different than on land.  When you think about that, it's pretty scary.  Nobody's watching it.  Nobody's caring for it.  There isn't any planning.”

Gang talked about how unknown the oceans actually are.  While 563 astronauts have visited space, there have been only 4 descents into the deepest level of the ocean.  While NASA spends over $17 billion a dollar a year exploring space, the budget for oceanic exploration was listed as under $25 million.    Much of the ocean floor remains unmapped.  As vast as it appears, the almost alarmingly finite nature of the oceans - on which all earthly life is so completely dependent - was demonstrated by an incredible graphic of an earth stripped of all its water, and the entire cubic volume of that water orbiting the earth in a tiny ocean-blue moon only 860 miles in diameter. 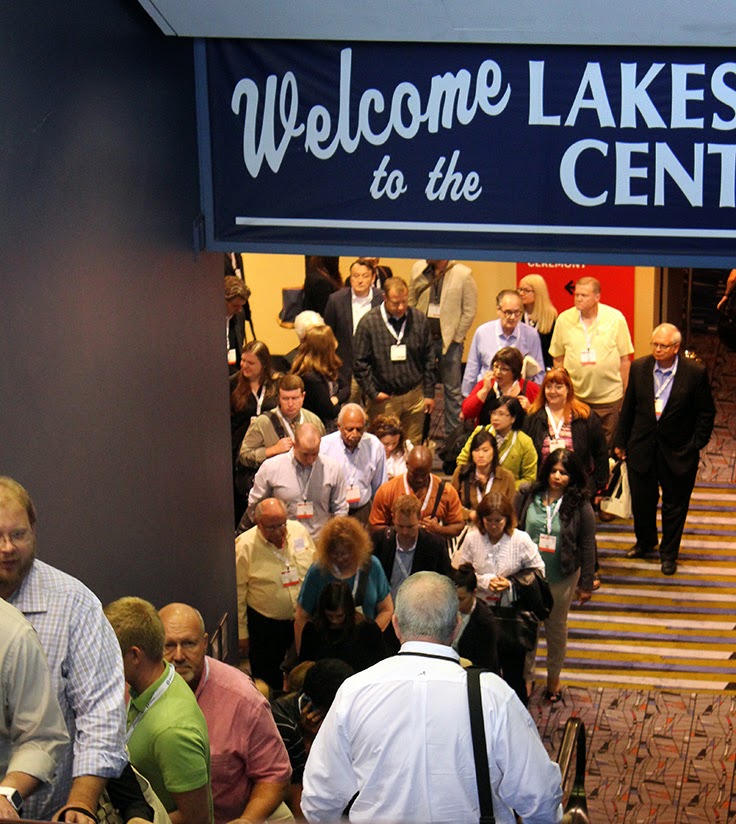 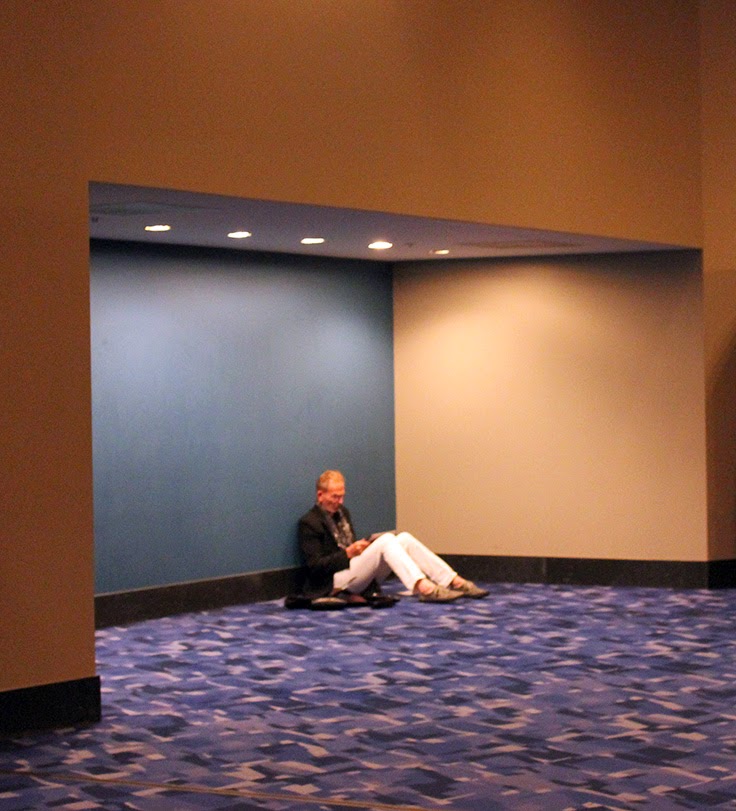 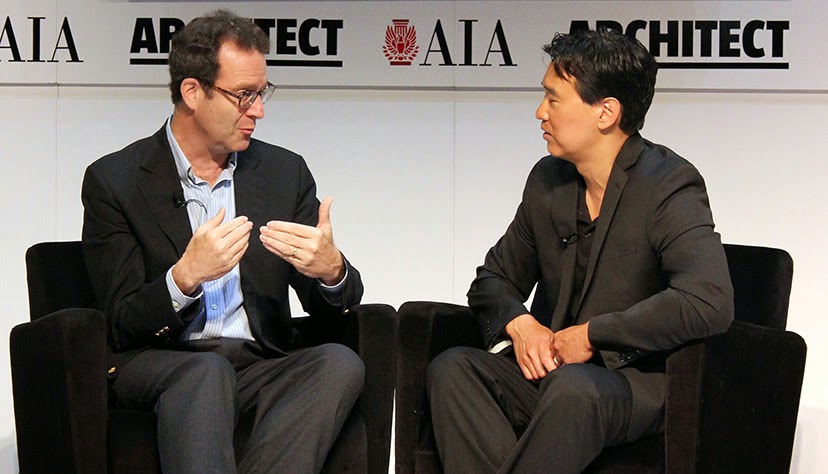 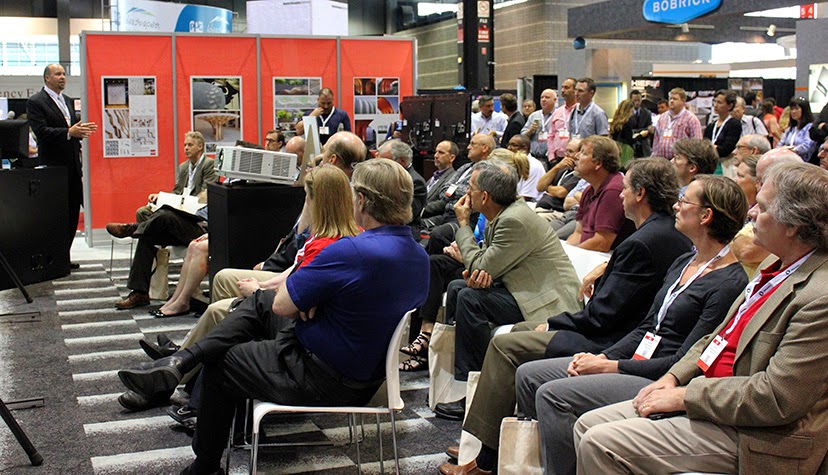 Walgreens Manager of Sustainability Jamie Meyers draws a crowd at the AIA Chicago  Lounge. (Heads up from a reliable source: Karen Erger and Eric Singer reportedly make the topic of Residential Risk Redux: Managing Risk in the New Economy -12:30 -1:30 p.m. Friday - not only informative, but a lot more entertaining than you might imagine.) 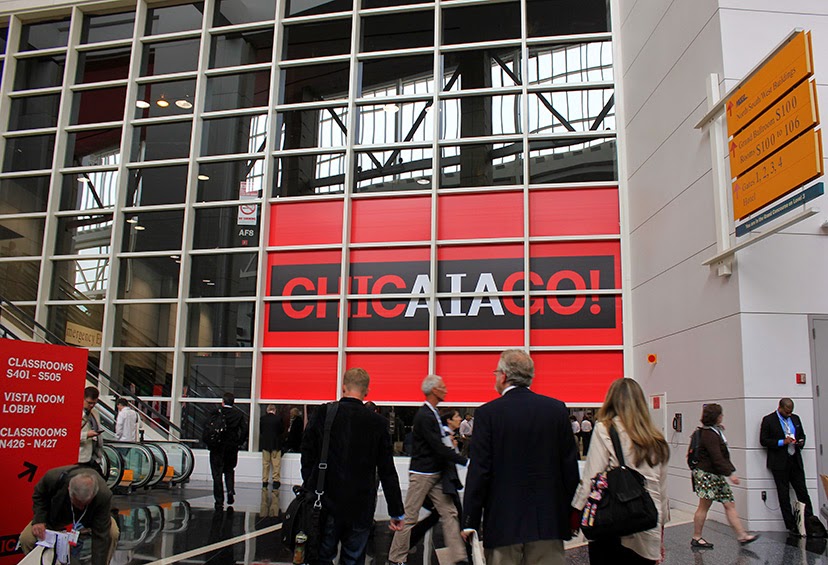