This is an International Competition? Chicago issues Bid Documents for proposals to create "North America's City of Lights"

It was last January that  Mayor Rahm Emanuel announced his idea to boost tourism by turning Chicago through an international competition to turn the Chicago into “North America's City of Lights"  Now, the Sun-Times'  Fran Spielman has uncovered the fact that the "competition" consists of what is basically an RFP for a “City-wide Lighting Framework Plan”. 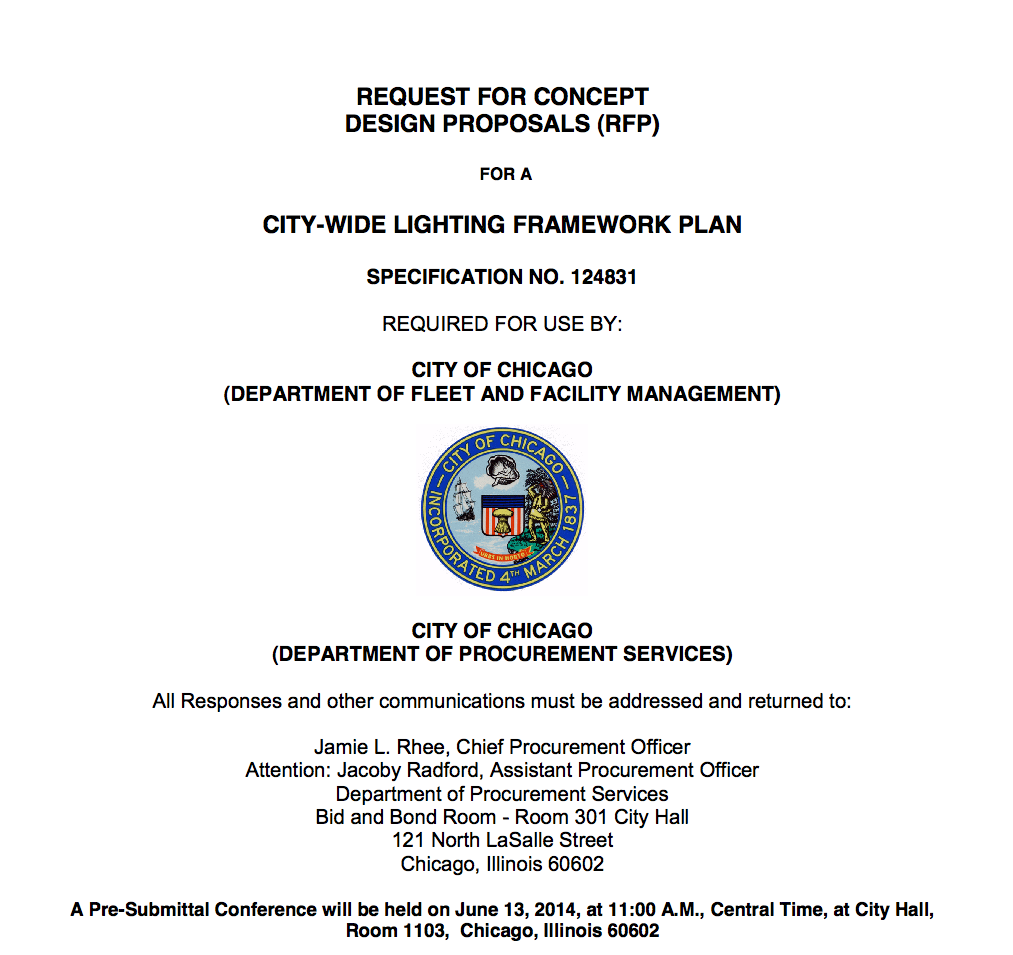 This is no competition.  No jury is referenced.  Proposals will go through The Department of Fleet and Facility Management Department.  The deadline for any questions is only two weeks away, with a "pre-submittal conference" at City Hall on June 13th, with July 7th the deadline for submissions, with the winning bid to be announced in “late summer”.  There will be no compensation for the first two phases.  Up to four finalists will receive $25,000. 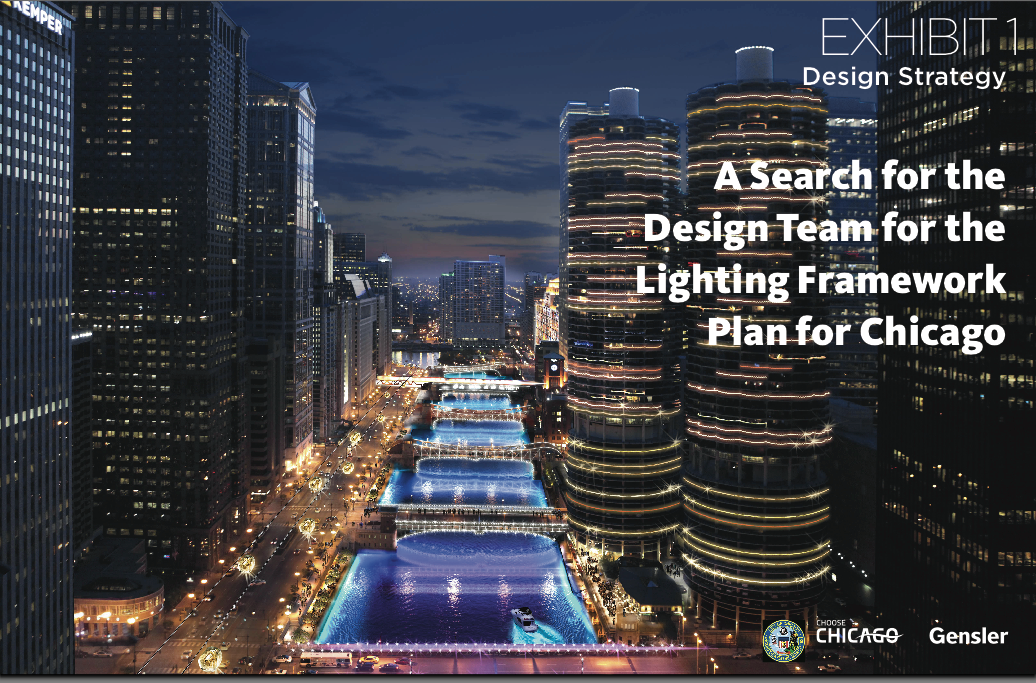 At first glance, this doesn't seem like the way to get great design, and the officially unheralded release of the RFP, coupled with the extremely tight deadlines - it took four months to announce the project, but participants get only a month to prepare, and only 10 days to ask questions - indicates the fix may already be in.  Still, there's a lot of study here, which I'll be doing, and you can also look at the official documents on the city's website here.  You can also read our original report from January . . . 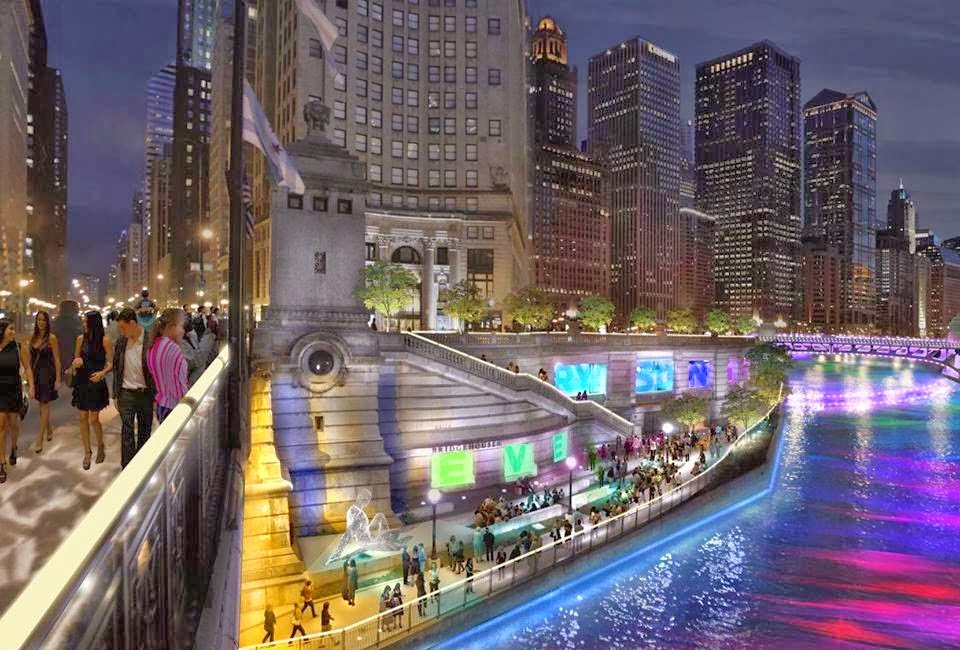 Damn it to hell! Study after study proves that circadian disruption from artificial light at night is the CAUSE of exponential increase of death by cancers, heart disease and rise in mental illness, depression, sleep disorders, memory disorders and more. Here are 3 video links worth listening to:
•Lights Out: Sleep is Still the Best Medicine BY CHARLES HINSHAW
presented by Riordan Clinic OCT 11, 2012
www.youtube.com/watch?v=OI15ZAOzOI4 "Light is the cause of most our current culture's health problems. This is based on circadian rhythms."
sleep deficits cost $15.9 billion direct costs , $150 billion in indirect costs (loss of work) .
50 years ago death certificates show we died from accidents, infection and natural causes
Now, we die of heart disese type 2 diabetes, cancer of all types & mental illness.
•Russell Foster: Why do we sleep? | Talk Video | TED.com
www.ted.com/talks/russell_foster_why_do_we_sleepTED
Notes: Russell Foster is a circadian neuroscientist: He studies the sleep cycles of the brain. Sleep disruption precedes mental illness, including bipolar,depression; profoundly harms creativity, memory, health. Tired people are massively stressed- leading to suppressed immunity, diabetes 2, cardio disease, breast cancer, prostate cancer, colon cancer, some lymphomas, and more;
spiked stress levels of anger, increased impulsiveness & poor judgement. A tired brain craves stimulants which increases propensity to drink and take drugs. 50% increased obesity risks due to metabolic disturbances caused by circadian disruption. Russell Foster is one of the first researchers who proved the circadian/ melatonin/ pineal gland/ artificial light link... 20 YEARS AGO! WHEN will we listen!?
•Circadian Rhythms and Mental Disorders : Jin Yi at ...
www.youtube.com/watch?v=mcgFEDx9P80
YouTube Jan 3, 2014 - Notes: Dr. Yi Jin graduated from Shanghai Medical University. He is a co-founder and CEO of the Newport Brain Research Laboratory, Inc. Circadian and mental disorders are at epidemic levels. depression -- 15million adults; anxiety disorders -40million; combat disorders- 1.6 million soldiers; autism 11%; adhd; 80% of mental disorders are associated with pre-existing sleeping disorders. We need to treat the sleeping disorders -- which are directly associated with TOO MUCH artifical LIGHT at NIGHT!

https://www.indiegogo.com/projects/solar-roadways Bring this to Chicago instead:
Solar "Freakin" Roadways

Is there anyone on this ArchitectureChicago PLUS network that would be willing to develop a lighting framework plan for Chicago, the Starlight City?

The deadline is so short, and the project so big, that it seems that a collaboration of efforts is appropriate.

Inside the RFP is the following text:
"Reducing light pollution, in general is a goal for the LFP [lighting framework plan]. It is not the aim to brighten Chicago’s already overly bright sky. As previously mentioned, in order for the impact of lights to work, there is a need for darkness. All design proposals should be sensitive to the importance of avoiding light pollution and their ultimate aim should be to improve the overall condition of the city’s night sky"

However, I still very much disagree that thousands of LED lights on bridges, and massive light projections on iconic buildings and light shows galore are in any stretch of the imagination a match for the above quoted goal of the RFP (unless there was a means to capture the light before it escapes upwards & sideways into the night sky).