110 in the Shade - Where would we be without ASHRAE Illinois, marking its 100th year? 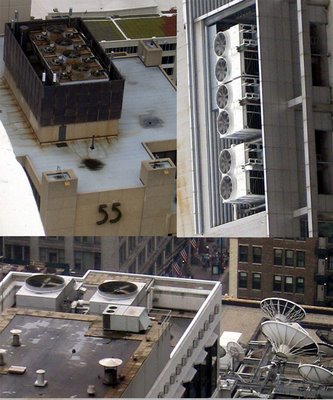 Joan Pomeranc of AIA Chicago passes on the news that the Illinois chapter of ASHRAE, the American Society of Heating, Refrigerating and Air Conditioning Engineers, turned 100 years old last month. ASHRAE, its parent, was founded in 1894, and has grown to 172 local chapters with 55,000 members globally. Illinois ASHRAE became the organization's first local chapter, on July 19, 1906, and it remains the largest to this day.

Putting aside for the occassion the fact that our obsession for creating an indoor climate that's perfect year-round has probably played a prominent position in heating up the globe and placing our fate in the hands of countries who don't much care for us, being able to escape Chicago's (decreasingly) bitter winters and (increasingly) overheated summers is one of the real perks, along with expanding longevity, advances in health care, and big screen plasma TV's, of living in modern times.

We can only hope that the next century of ASHRAE will see the attainment of Transsolar's Matthias Schuler's goal of creating technologies that let buildings breath naturally, without chillers, even as we remain thankful, however guiltily, for the heavy-duty air conditioning that makes our current legacy of environmental clunkers bearable.