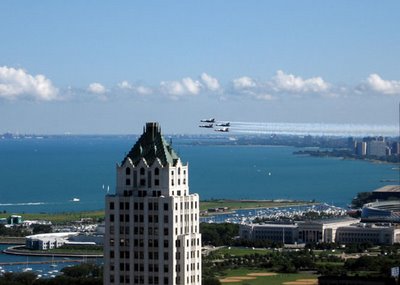 Late each August, the Chicago Air and Water Show draws millions of people to the city's lakefront, and each year the big finale everyone waits for is the precision maneuvers of the U.S. Navy's Blue Angels (alternating yearly with the Air Force's Thunderbirds).

The six F/A-18 Hornets race in and out across the city to regroup over their performance site just beyond the lakefront beaches, emitting a piercing pinpoint roar as they tear through the sky, only to disappear out of view in an instant. And then that sharp crescendo returns, at first faintly, but in a split second escalating to an ear-crunching roar, only to retreat into sharp diminuendo seemingly at the concurrent moment of its arrival. 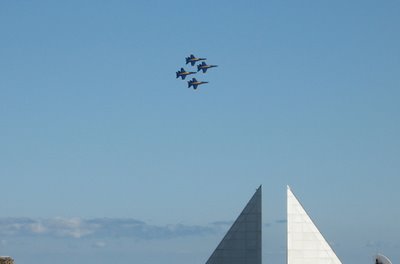 It's an impressive routine no matter where it takes place, but over the center of a great, dense city like Chicago, it has a power it has nowhere else, combining the exhilaration of flight with an unsettling subtext. As the planes move with their blazing speed over the sea of moored towers, you get a sense of mirrored vulnerabilities. Against the huge mass of the city, the jets look like specks that you could fling from the sky with a flick of your thumb, but at the very same time you can't help but remember the true purpose of these stunningly sleek machines as delivery systems for destruction and death; their small yet powerful presence intimates the fragility of all of our mighty and manifold constructions. A terrible beauty, as Yeats once said. 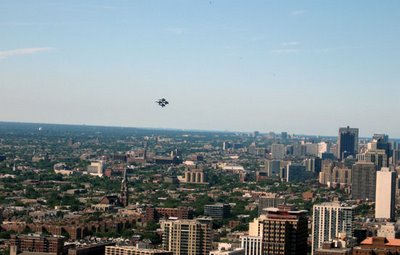 Did you mean Canada's Snowbirds? The Blue Angels are feom the US Navy.

Typo there. I meant 'from.'

Thanks for the info, and sorry for the mistake. Should have read Air Force Thunderbirds. Correction made.