End of The Road 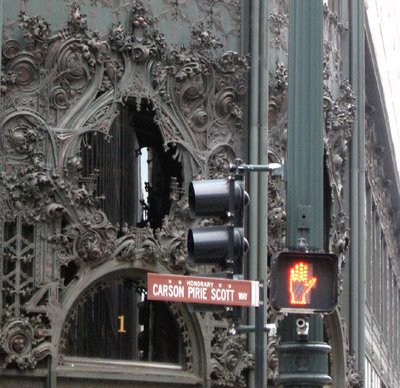 Last Friday saw the sudden announcement by its current owners that the century-old Carson Pirie Scott department store on State Street, one of architect Louis Sullivan's greatest masterpieces, will be shut down by March of next year. I'll be writing a lot more about this, and about the journey of Chicago's State Street from one of the world's greatest shopping venues to a a diminished collection of discounters and outlet stores, when Federated rebrands the venerable Marshall Fields in Macy's colors as its local flagship in September, but for now here's a few initial thoughts - and more pictures - and what's going on and where we might be heading. Read and see it here.
(Click on time for permalink) 12:01 PM

Great post, thank you. As a treat, one of my aunts used to take me to shop and then tea at Bullocks Wilshire in Los Angeles, now Southwestern Law School. I now work as an urban designer and lecturer in London and also teach retail design. My focus in the retail course is to show the value of predicting trends in order to adapt or prevent the type of closures you discuss. Of course as you point out, this approach is pointless if new or existing owners have no interest in the retail businss to begin with.

Does it matter so much what is inside this building? If not a department store, then perhaps another function. I, for one, thought the interior of Carson's was a dump, poorly maintained and with a haphazard merchandise display.

Given that the Landlord bought out Carson's lease, perhaps they have another tennant in mind.

I would like to see this kept as a public building. Something about the "cultural center" offerings in the Loop seem to keep buildings off limits to the public, and devoid of culture.

Thanks for making the point--I thought it was obvious to people, but I guess not--that despite the sonorous platitudes about the death of the department store, that's exactly what Wal-Mart is, minus every shred of glamour.

Between the loss of the Berghoff & my after-work hangout, Trader Vic's, and now the loss of the bookends of State Street, that late street, 2OO6 is turning out to be the year from hell.

Thanks, that was worth noting. Visit us at Shopping Tips