John King, the perceptive architecture critic from my second favorite city, San Francisco, recently spent some time in Chicago and the result has been two major articles in the San Francisco Chronicle on our city and its architecture. 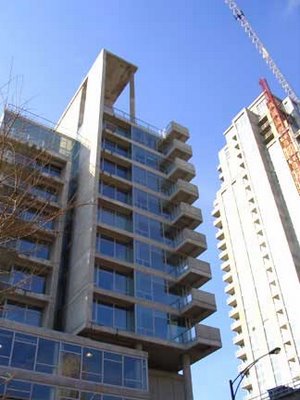 The first was written for the paper's travel section, but it's actually a great overview of Chicago's architecture, including a look at Perkins + Will's Ralph Johnson's new Contemporaine on Grand, one of the city's best new residential buildings. There's the obligatory gloss on the wonders of Millennium Park, but also a critique of the "cookie-cutter capitalism" that has created "too many tall towers that generate profit but don't stir the imagination." There are thumbnail sketches of 10 prominent landmarks, from The Rookery, to Inland Steel, to Marina City and 111 South Wacker. It's a great read for both visitors and local architecture buffs.

Then on Saturday, August 12th, King published a second piece on how San Francisco mayor Gavin Newsom is looking to Chicago Mayor Richard M. Daley for inspiration. Inevitably, such an account includes a lot of discussion about Daley's role in moving the city forward, especially with his intense focus on environmental issues. Newsom, serving in a city whose obsession with diversity and inclusiveness often seems to wind up invoking paralysis rather than progress, understandly looks longingly on Daley's aura of a strong-man able to act seemingly unencumbered by undue process or dissent.

Anyone who has read my musings on the subject know I find this to be a dangerously two-edged sword. Nowhere is this better illustrated than in the way the mayor recently repaid Newsom's admiration by telling a San Francisco official who had come to testify in support of Chicago's living wage ordinance to basically shut up and go back where he came from. "They should go back and help their own cities.... you manage your own city. We manage here. . . . We've got more work going [on] downtown in one block than . . . those cities [San Francisco and Santa Fe] combined." A perk of being a kind of elected monarch is that you can tell that kind of whopper with a high confidence no one will want to contradict you. If the mayor says so, it must be true, at least until the contradictory reality can no longer be swept under the rug.

It's always refreshing - and instructive - to read how an acute observer like King sees us, and both of his articles are well worth checking out, here and here.

Thanks for posting the links to these articles. After reading them, they make me extremely proud to be a Chicagoan.