Biographer Twombly to speak at Sullivan Symposium in Grinnell, Iowa

Via Pauline Saliga of SAH and Joan Pomerance of AIA Chicago comes word that the sesquicentennial of architect Louis Sullivan's birth is being celebrated not just in Chicago, where the newly renamed Chicago History Museum is spearheading Louis Sullivan at 150, a month-long series of events being sponsored by a wide range of the city's cultural institutions, but also by Grinnell College and the City of Grinnell, Iowa, with a five day sequence of events from August 30th to September 3rd. Grinnell is the site of Sullivan's Merchants National Bank, which opened on New Years Day in 1915.

According to Sullivan biographer 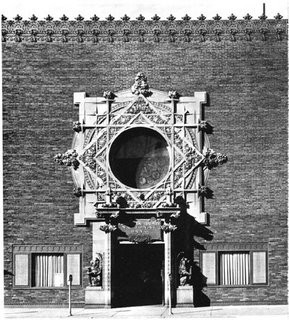 Willard Connelly, after meeting with bank officials and visiting the site, the architect "bought at a drugstore a few sheets of yellow paper. Sitting with the committee in a little room of the old bank, adjoining the president's, he took a common desk ruler and sketched his entire plan." The result was one of a series of small bank commissions that sustained Sullivan late in his life, in polychrome brick. "The brick, through with extremes from deep blue to bread-crust brown, he so skillfully distributed that its hue as a whole seemed to be garnet," writes Connelly.

The bank's most photographed feature, however, is its entrance, described by a later biographer, Robert Twombly, as an "incredible burst of terra-cotta surrounding the stained glass ocuulus over the entrance. At least eight layers of diamond, circular and square banding, infilled with geometric and organic ornament in brown and green, combined to form a giant medallion . . . "

On August 31st Twombly, himself, will provide the keynote lecture, Louis Sullivan and his Legacy, for the Grinnell symposium, which includes other lectures - including one by the U of I's Paul Kruty, as well as music, documentaries, and tours of the bank, all culminating with a celebration on Sullivan's actual birthday, September 3rd. There will be cake.