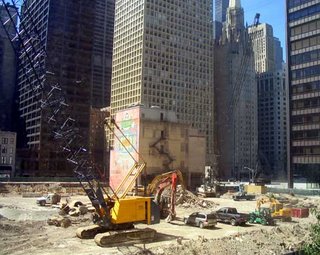 This past Friday, news outlets including the Chicago Tribune and Crain's Chicago Business reported the Mills Corporation is about to turn over control, in a deal scheduled to close within the next month and a half, of the office and residential components of the downtown Chicago's Block 37 project to the venerable Chicago firm of Golub and Company. The beleagured Mills Corporation was only the latest of a long line of developers taking a bat at developing Block 37, across from the flagship Marshall Field - soon to be Macy's - store on State Street, a full-block site that has stubbornly resisted rising above anything other than a dirt farm since every last structure on it was hurriedly demolished in 1989.

Construction had already began on the office building, which is to provide a new headquarters to the Morningstar investment firm, as well as new facilities, including a streetside studio, for CBS Chicago. What was new in the announcement is that Golub is saying it expects to now also break ground for two new residential towers, to be designed by Solomon, Cordwell Buenz - one condo, one rental, with a previous hotel component dropped - this coming Spring. Mills retains control of the block-long retail portion of the project, being designed by Gensler Chicago. 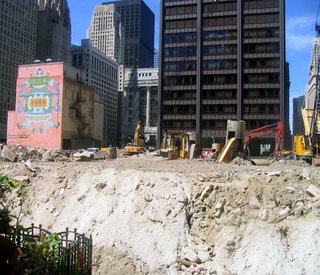 Earlier in the year, construction workers walked off the project as the firms they worked for claimed they weren't getting paid by Mills. Now, however, cranes and heavy-duty construction equipment can be seen in daily operation on the site. Could this finally be the real thing? I like to believe it's true, but I'll feel a lot better when we actually see something rising out of the ground. For countless months now, the only new construction on the site has been the giant mounds of dirt taken from the equally giant pits and moats being excavated all throughout the block.

Also in Crains is an eye-opening article on a new Civic Federation study revealing the dirty little secret that, despite Chicago business's constant complaint of increasing property taxes, their effective tax rate has actually dropped by more than half from 1999 to 2004, as the residential building boom has seen home and condo rates soar and homeowners assume an increasing share of the property tax burden. While Chicago's commercial and industrial rates remain higher than in suburbs like Oak Brook, they're now on a par - or actually a tad lower - than in locales such as Naperville, Joliet and Elgin.