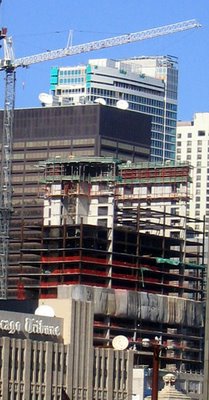 For decades after it's 1968 completion, architect Harry Weese's Time-Life building (now known by its address, 541 N. Fairbanks) dominated Streeterville. McClurg Court's two towers and the 1926 Furniture Mart may have had it beat by a few feet, but it was the Time-Life - it's no-nonsense, brawny, big-boned, deep tawny Corten steel frame little brother to Jacques Brownson's 1965 Daley Center in the Loop - that provided the visual anchor for the district.

Now, the great building boom that has marked the turn of the 21st Century is re-ordering the scale of Chicago's skyline, turning once dominant towers into dwarfed also-rans. It used to rise majestically from a surrounding a sea of surface parking lots, but today the Time-Life is being pinched between two new high-rises, the Streeter to the east, and the Fairbanks at Cityfront Plaza to the West. It's becoming an eclipsed remnant of the architectural landscape of the 1960's, just as the domed Jewelers Building on east Wacker, a child of the booming 20's, which once rose out of a fabric of low-density parcels along Wacker beside the river, punctuating a great Chicago street vista that endured for three-quarters of a century, is being crowded out by a new king-of-the-hill, Adrian's Smith 1362-foot-high Trump Tower. Wax nostalgic for a moment and move on. A new visual order approaches.