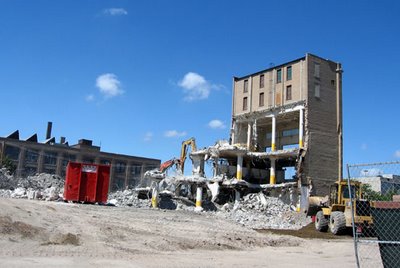 They don't make them anymore like the tower at 823-825 Blackhawk, shown here undergoing a radical and irreversible alteration. Most recently a paint factory for the True Value hardware co-operative, it was part of an industrial district, hugging the Chicago river just south of North Avenue, that goes back more than a century and includes two abject yet surviving factories designed by Adler and Sullivan. As manufacturing has declined, the neighborhood has been gentrifying. What was once a liquor store patronized by both yuppies and winos is now a jewelry store. North Avenue has become a major commercial strip, with Crate & Barrel, Victoria's Secret, Old Navy, and a new Circuit City, in a transformed four-story loft. Just across the street from the Blackhawk factory, another long-time resident, the brightly-bricked New City YMCA has been sold to cash in on the current real estate boom. It's destined for demolition and redevelopment, just like the TrueServ factory, which is making way for more slick new retail. 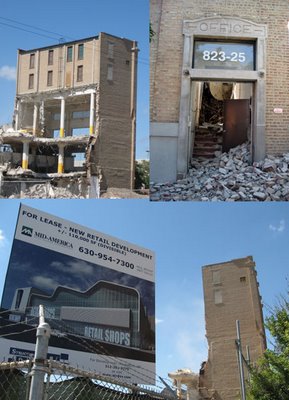 I'm pretty sure that building was originally the Prima brewery. Yet another old brewery building bites the dust--there's only a handful of them left.