Historic Uptown Theater to be Purchased by City of Chicago? 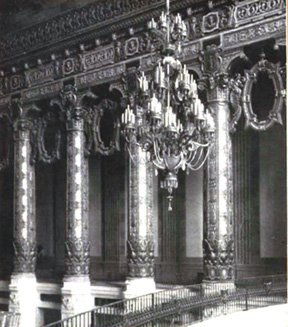 The eagle eyes of someone at Compass Rose Cultural Crossroads has come across the fact that the just-published agenda for the City of Chicago's monthly Community Development Commission meeting next Tuesday, September 26th includes an item indicating the city may be purchasing the 4,300 seat Uptown Theater, shuttered since 1981, which to date has so far resisted all efforts to save and restore it.

A TIF (tax increment financing) district diverts all new property tax revenues in a defined geographic area into a special fund used to spur development in that area. In Chicago's Loop, $70,000,000 was kicked in from Central Loop TIF to help fund restoration of the three of Chicago's grandest movie palaces, the Chicago, Palace and Oriental, as well as for building a new home for the Goodman theater behind the preserved facades of the Harris and Selwyn Theaters. The final cost of these projects, however, was several times the TIF contribution.

The cost to restore the massive Uptown, which takes almost all of a full city block, could be $30 to $50 million and up. The building has received minimal maintenance over the past two decades and is in an advanced state of decay. The city could probably pick up the Uptown, which an official city landmark since 1991, for a million or two, simply to secure the building from further harm.

Then...perphaps to resell it to a developer for $900,000 to do a vertical mall/Century Theater on the 2800 block of North Clark

Simply for a multi-plex theater to be used by Classic Cinemas (own and operate the York in Elmhurst and the Lake in Oak Park) on a long term lease.

All this to go along with the new Border's a block to the south (or north...I can't remember)

Though any serious reuse of the property is probably (but hopefully not) dramatically alter the interior.

$70 Million for three theaters? It costs nowhere near $20 Million to restore a theater.

The field of unique private/public restoration partnerships is so full of crooks that there is no number which is unbelievable in price, but I can tell you, in cost, the number is about 1/3 of the numbers you quote even for the largest theaters.