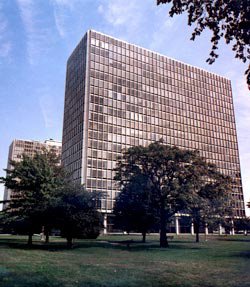 October 16th marks the 50th anniversary of the groundbreaking for Detroit's Lafayette Park, an 78-acre mixed use development not far from the city's waterfront that has proven an enduring success even as much of the city around it fell into deep distress.

Lafayette Park is the product of a team of four that gravitated around Mies van der Rohe in Chicago. First, there was developer Herbert Greenwald, who also took the risk to build Mies's 860-880 Lake Shore Drive Apartments, arguably the first modernist residential high rises. There was Mies himself and two of his IIT colleagues, the great landscape architect Alfred Caldwell, and Ludwig Hilberseimer, the planner who taught with him at the Bauhaus, and who followed him from Germany to teach at IIT.

Lafayette Park brought together these four men at the peak of their powers. It could be said to the one place where Mies, who had been steeped in socialist theory while in Germany but built his American practice on well-heeled patrons, actually married his art to social conscience. But perhaps the most extraordinary thing about Lafayette Park is the way it turns today's conventional wisdom about planning on its head. The development shears off the basic street grid, and personifies Le Corbusier's concept of the Radiant City, a series of tall skyscrapers set amidst abundant parks largely isolated from through streets. It's a basic matter of faith these days that these are all terrible ideas, but at Lafayette Park, they worked, and have continued to work for half a century.

Via PLANetizen, here's a great article from the Detroit Free Press by its architectural critic John Gallagher that tells the story. What is now called the Mies van der Rohe Residential District is listed on the National Register of Historic Places. There's also a book, Lafayette Park Detroit, edited by Charles Waldheim, who will be speaking this Wednesday, September 27th on landscape urbanism at a Chicago Architectural Club session, which will also include Sprawl author Robert Brueggman, at 6:30 P.M. at the Ispace Gallery.

Yes...the condos are relatively cheap and LP has the highest income density in all of Metro Detroit, as of 2002. Even beating the wealthy suburbs in Oakland County.

I would imagine a big part of their success is because they were private condos -- unlike the brick punched-opening warehouses typical of public (ware)housing that are the more common representation and result of Corbu's planning principles. Like modern architecture, modern planning works best when detailed properly for the user that can afford it, and not cheaply done.

Ironically, the expanse of park that many criticize his principles on probably incubated them from the decay around.

Though the services -- grocery stores, etc. must have moved to the suburbs as well, unless they were self-contained, or there were holdouts supported by this development? That would be interesting to know.

BBR said...
This comment has been removed by the author.
5:39 PM

I grew up in Lafayette Park. We moved into our Joliet townhouse in 1961 where my mother still lives. The units are coops not condos. There is one landlord for "shopping center". He has not been supportive of the community and probably has not done much to attract better retailers. There used to be a decent supermarket, a bank and a pharmacy throughout the 60s and mid 70s. But the other businesses always came and went. The greatest achievement of the development was the community that thrived in the Park for more than 40 years. I am very close to many of the people who grew up in the Park. We have had a number of reunions in recent years. Many of our parents still live there. There was a documentary done about the Park as a development several years ago and residents are filming another documentary about the community right now.

My name is Maria Castro, I am a architecture student in Spain.
The University is doing a work about Lafayette Park, in Detroit
Can you help me?
The post of BBR is striking.
There was a documentary done about the Park ??? where??
please, sen mail: marcastrocedeira@gmail.com
help¡¡