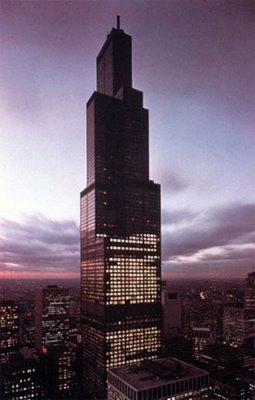 The College of Architecture at the Illinois Institute of Technology has announced a September 27th evening dedicated to the brilliant structural engineer Fazlur Khan, whose work at Skidmore, Ownings and Merrill with architect Bruce Graham included both the Sears Tower, for decades the world's tallest building, and what is arguably Chicago's most beautiful skyscraper, the John Hancock Center on North Michigan Avenue, a gently tapering, 1,127 foot high shaft whose facade is sculpted by a series of massive x's formed by the structure's cross bracing. Khan, who died in 1982 at the age 52, is generally credited for developed the braced and bundled tube systems of tall building construction.

A 5:30 P.M. reception in the center core of Mies van der Rohe's Crown Hall, at 3360 South State, will include a display of Khan's work, and will be followed at 6:30 at the nearby McCloska auditorium of the schools new campus center by a lecture, Reflections on the Work of Fazlur Kahn, by A.G. Davenport, professor emeritus at the University of Western Ontario. A 7:00 panel discussion will include Mahjoub Elnimeiri, Micheal Hogan, John Zils and Yasmin Khan Byron, Kahn's daughter, author of Engineering Architecture: The Vision of Fazlur R. Khan.