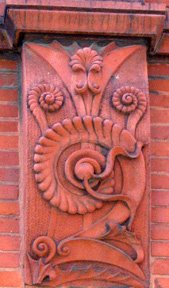 Sunday, September 3rd, marks the 150th anniversary of the birth of architect Louis Sullivan. The event is being celebrated in Chicago with Louis Sullivan at 150, a six week series of events being co-ordinated by the newly renamed Chicago History Museum. The website includes a full calendar of all the events, which kicks off today with a Sullivan's Autobiography of an Idea Bus Tour, sponsored by the Hyde Park Historical Society. Today's tour is already sold out, but it's scheduled to be repeated three Sundays from now, on September 24th.

A lot of ink stands to be spilled on the Sullivan's architecture, life and legacy. First out of the gate is Chicago Sun-Times architecture critic Kevin Nance, with his take, The Tragic Tale of Louis Sullivan. No doubt I'll weigh in, as well, but for now, here's a photo of one of Sullivan's lesser known surviving Chicago structures, the Ann Halsted row houses of 1884-1885, in the 1800 block of Lincoln Park West. 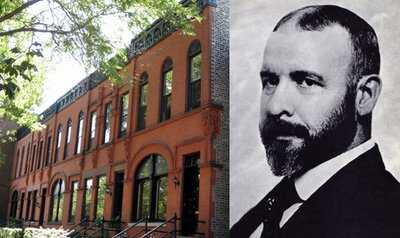