Ah, for the old days, when not even a Rockefeller could bend the will of an obstinate 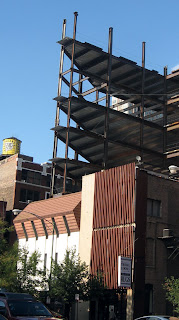 Today, of course, developers assemble neat, contiguous rectangles for their sites. And if the current owners resist their blandishments, the city will most likely be more than happy to invoke its expanding powers of eminent domain to muscle them out. Today, the premium is on relentless efficiency, and the often numbing regularity upon 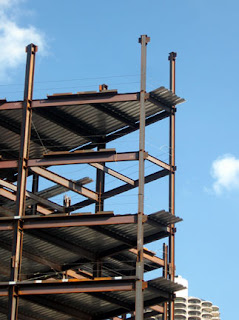 which it feeds. Which makes for cityscapes that are much more ordered, and a lot less interesting.

All this was brought to mind by an encounter with a new development from the Alter Group, 111 West Illinois, a ten-story office co-op that will be the new home of the Erickson Institute, which will leave behind its handsome brick loft building on Wabash, just north of the IBM Building and garage. For whatever reason - and I'd to imagine there's a good story behind it - two small, mundane commercial buildings on LaSalle somehow survive, even though they pinch 111 West Illinois to little more than a third of its Clark street frontage.

The irregular site has inspired an elegant solution from Solomon, Cordwell, Buenz's Martin 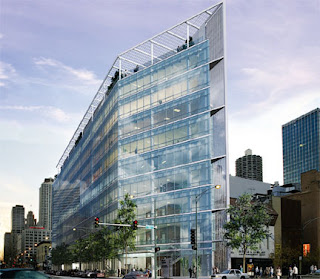 Wolf, who recently won high praise from the Trib's Blair Kamin for his 340 on the Park highrise residential tower, part of the Lake Shore East development. As you can see from the rendering, he takes advantage of the finger jutting out from the main bulk of the building to give 111 West Illinois a triangular taper that reduces to a razor sharp exo-edge where it meets LaSalle.

The rise of the structure's steel skeleton has left behind some striking, almost Golgotha like images of spiking columns reaching skyward in the midst of giant cranes. 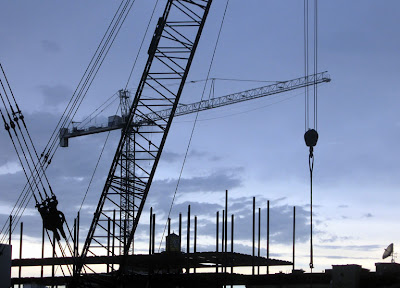 I walked by this project back in May when it ws practically just a billboard and a shovel. My random thought at the time was:

OK, look at the photo...looks nice, where's the 6-story parking garage...hm, looks attractice but a strange place for such a nice looking building...has to have the 6-deck garage in the back...god, why can't Chicago just build things without a 6-freakin' parking structure...hm, still don't see a parking garage...WOW, perhaps, NO, this cannot be: new construction, Natarus-approved, sans a multi-story butt-ugly parking garage at eye's level? Wow...

Perhaps there is a glimmer of hope for Chicago after all even if this is a piddly, quaint, interesting design for a rather neglected area of River North.