A note from David Balaban alerted us to a couple of new videos on the Balaban & Katz Foundation website, 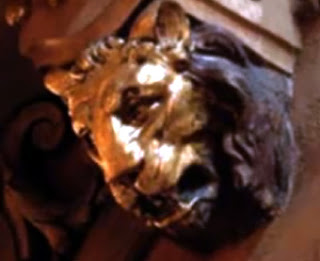 dedicated to the legendary family company that dominated Chicago film exhibition in the era of the movie palace. The first contains excerpts from a documentary Balaban is making of interviews of family members remembering the four brothers who built the chain. He's also the author of the recent book, The Chicago Movie Palaces of Balaban and Katz, which is both a chronicle of Balaban's family, and a museum of factoids, stories and photos from the heyday of the ornate theaters, including a summary of receipts that shows that the flagship Chicago, alone, entertained an incredible 2,200,000 patrons over the just the first half of 1924, with an average weekly gross, adjusted to today's ticket prices, of nearly $750,000.

The second new item points to a YouTube video, The Uptown Today, edited by Balaban, which features a series of images by Loren Robare of the architectural details of 5,000 seat North side movie palace, closed since 1981. The theater continues to decay, with the auditorium in the video looking like the bleached bones of a lost castle sunk to the bottom of the ocean. 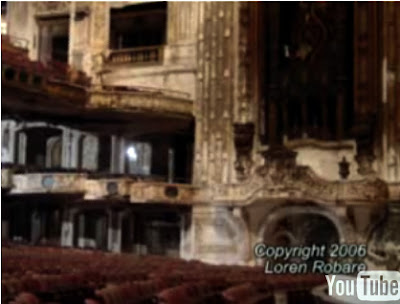 In May, Crain's Chicago Business reported that, after decades of attracting nothing but dust, two different suitors were fighting to acquire and restore the Uptown, but since then an ominous silence has again descended.

Earlier this month, another of Chicago's famed palaces was lost when the 2,000 seat, 1931 Nortown was demolished, after being closed since 1990. The beautiful shot you see here, for 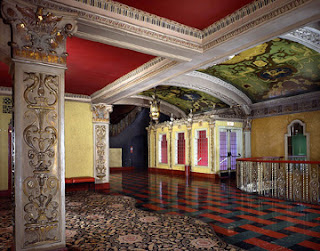 sale as a print for $800, is sampled from the web portfolio of the work of photographer Russell Phillips, a remarkable series of color shots of Chicago area movie palaces from the 1980's, many of which - the Nortown, the Esquire, the Parkway - are now gone. Even though the structures were already in deep decline and nearing their end, Phillips was able to capture their original astonishing beauty one last time. Check out this remarkable shot of the Moorish-styled ceiling of the United Artists, demolished in 1989 in exchange for what would remain a vacant lot for the next 15 years, until construction finally began on Block 37.

the preservation efforts were something i was interested in a while back, but have since moved out of the neighborhood.

anyway, not really a request, just something that may be of interest.

all the more reason to patronize the great theaters that remain, including the Portage (Friday, Aug. 24, is last night of summer silent films there), Music Box, Pickwick in Park Ridge, etc....On another topic, check out the national trust's online news for August 22--a story on Brad Pitt's visit to the Farnsworth House

Any chance we can get a link to the youtube clip? this theater looks amazing from the clip. i've always wondered about some of those crumbling buildings in uptown you see from the redline.

There is a link to the video in the post. (Click on the intial mention of the video name)
But here it is again: